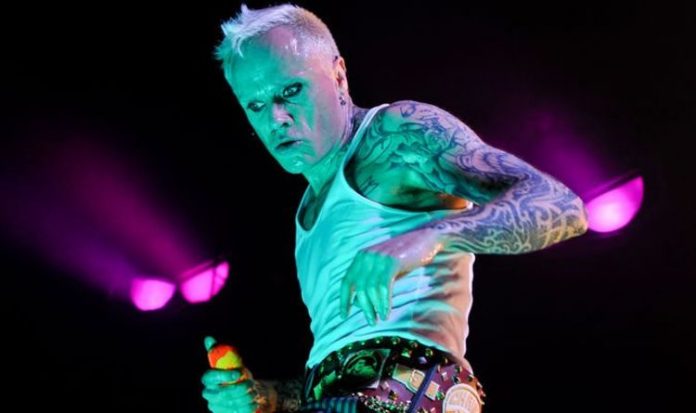 The Prodigy have announced they will get their second cinematic release 10 years after their first live gig movie, The Prodigy – World’s On Fire, came out. Paul Dugdale, the director of the first release, will be taking on the new film, it was today announced. Speaking about the project in a statement he said: “The film will be as wild as the band.”

Dugdale continued: “Dark at times, strong changes of pace. It will be a visual assault too, stylistically striking, contemporary and challenging.

“We want the viewers to leave the cinema like they’ve just stepped off a roller-coaster.”

The film, which does not yet have a release date, will be created in partnership with the band’s members, Maxim and Liam Howlett and will tell the story of their “boundary-pushing influence on the ‘90s electronic boom in America”.

Maxin and Howlett said they were dedicating the upcoming film to their bandmate, Keith, who died in 2019.

In a joint statement the band members said: “We are making a band documentary film… so f****n’ what?

“After the devastating passing of our brother Keef in 2019, the time feels right for us to tell the story of our band, all of it, the whole nine.

“It’s a story of the chaotic and troubled journey of our gang, our band, the people’s band – The Prodigy.

“Or simply – a story of brothers on a mission to make noise… to ignite the people’s souls and blow-up sound systems worldwide… that’s f****n’ what!” (sic)

Keith was found dead aged 49 on March 4, 2019 after Essex Police were called his home. The police announced they were not treating the star’s death as suspicious.

At an inquest into the Firestarter singer’s death it was later confirmed he died as a result of hanging.

Senior Coroner Caroline Beasley-Murray recorded an open conclusion, saying there was not enough evidence to indicate he had intended to take his own life.

She said: “We will never quite know what was going on in his mind on that date.

“I’ve considered suicide. To record that, I would have to have found that, on the balance of probabilities, Mr Flint formed the idea and took a deliberate action knowing it would result in his death.”

She added: “Having regard to all the circumstances I don’t find that there’s enough evidence for that.”

The band’s Twitter account confirmed the death in a statement which read: “It is with deepest shock and sadness that we can confirm the death of our brother and best friend Keith Flint.”

The Prodigy account added: “A true pioneer, innovator and legend. He will be forever missed. We thank you for respecting the privacy of all concerned at this time.”

After the confirmation of Keith’s death the band announced the cancellation of every forthcoming gig.

For confidential help please contact Samaritans on 116 123 or Samaritans.org.