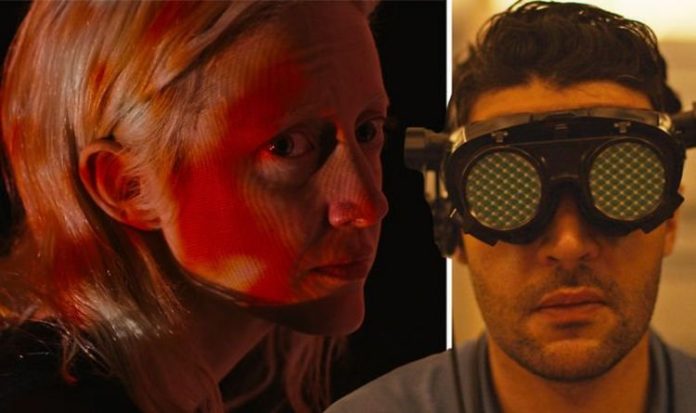 As soon as Possessor hits the screen, it creates an elaborate and sleek futuristic world that fans of William Gibson’s Neuromancer will feel right at home in. The film follows Tasya Vos, a corporate cyber assassin who, through use of kidnap, and forced installation of invasive brain-control technology, uses a machine to possess people. While the specifics of exactly how this is done are kept under wraps, this only adds to the gritty and botched feel of the world created in Brandon Cronenberg’s hit.

Once she has possessed her target, Tasya assassinates someone close to the host of the body she has control of.

Using this method of corporate assassination, her employers manage to get ahead in the business world.

Like a real-life adaptation of the HITMAN video games, Possessor delves into the areas of fiction that would almost definitely happen in real life if the technology made itself available.

While Tasya is shown off to be the best of the best, it doesn’t take long before it is revealed she isn’t in complete control.

Tasya actor Andrea Riseborough is truly mesmerising in this.

Despite the fact it is Tasya’s job to blend into crowds, Riseborough incredibly portrays herself as an alien in human skin.

Quiet dinners with her family members, or conversations with her boss unravel her deeply-seated issues – and in turn showcase just how exceptional Riseborough is on screen.

Riseborough would be the runaway queen of the film if it wasn’t for the added inclusion of Abbott, who meets her acting prowess with every step.

Abbott is tasked with the age-old science fiction trope of playing multiple people, in a way – but he manages to recreate the feel of this tradition without making it feel wrote.

Despite being a six-foot tall man who could capture the gaze of any room, his performance is almost tender, vulnerable, and scared. It’s fantastic.

Riseborough and Abbott are fantastic. Possessor may be their best work to date.

Possessor’s plot  errs on the darker, more realistic side of same coin that The Matrix inhabits.

Although the Wachowski siblings’ sci-fi/cyberpunk blockbuster will go down in history for its industry-shattering look and feel, comparatively it merely scratches the surface of the world and vibe created in Possessor.

The themes and ideas explored in Possessor aren’t brand new (in terms of science fiction from the aforementioned Gibson, and Richard K Morgan’s Altered Carbon – far from it) but the method of showing them off is completely unique, and absolutely exceptional.

Possessor left me considering its choices long after the credits had rolled, and I am dying to dissect each scene and event in many subsequent viewings.

I am reluctant to compare Brandon’s work to that of his father’s, David Cronenberg, but the apple certainly doesn’t fall far from the tree.

Perhaps the key aspect Brandon has “inherited” from dad is the truly grotesque body horror.

There are multiple scenes in Possessor which I was forced to look away from because it was simply too graphic. But, just like in The Fly or Videodrome, these are the moments people will talk about for years to come.

The graphic nature of the film is what completes the brutal realisation of Brandon’s world, though. It is utterly enthralling, and an onslaught to the senses – both good and bad.

That isn’t to say that the film sacrifices any visual fidelity for cheap head-splattering parlour tricks – not at all.

The true beauty of Possessor is showcased in the midway point of the film, where a thematic perspective shifts, and a feast for the eyes is given as tribute. Fans of Blade Runner 2049 will, in particular, feel right at home in this daunting display.

Collections of glorious neon imagery and haunting presentations are collected into a thrilling and unnerving sequence. Almost every shot of it in question could be used as a wallpaper, or a piece of art. Brandon has outdone himself in this respect.

Every single detail in Possessor – from the costuming, to the dialogue, to the visual hooks and references – everything is spectacular. This is one of the films of the year, without question.

Possessor is perhaps the best and most exceptional cyberpunk thrill I have ever experienced. Brandon Cronenberg has somehow crafted an endearing, horrifying character, and launched her into a world that feels desolate, haunting, and entirely realistic. Similar to the tech-filled fiction that has come before it, the cyberpunk setting is just that – a backdrop – and the real gruesome machinations come from the psyche of the people that inhabit it. Throw in some perfectly-balanced neon glows, a villain who won’t quit, and a mind-blowing ending, and you have Possessor – a film that will be devoured by film buffs for years.