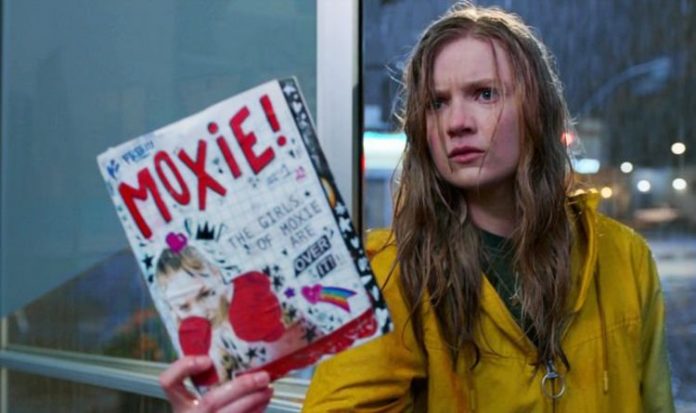 Netflix resident Poehler directs her second film with Moxie, the movie based on the novel of the same name written by Jennifer Mathieu. Moxie follows the journey of shy high-schooler Vivian (played by Hadley Robinson) who is dealing with a cacophony of teenage issues. From crushes to friend drama and boy trouble, Vivian lives a subdued life until a new girl arrives at school and opens her eyes to what is really going on around her.

Newcomer Lucy (Alycia Pascual-Pena) begins pointing out various examples of gender inequality in her high school and urges Vivian and her pals to help her do something about it.

Vivian’s mother, Lisa (Poehler), is an old-school feminist who waxes lyrical about fighting the patriarchy as a teenager with heavy punk music and brutal protests.

Within its pages are accusations of how the patriarchy is still at play in 2021, as well as a call to arms for the women in the high school to rise up and fight against the established “norm”.

Mitchell is played by Patrick Schwarzenegger – son of Arnold – and is one to watch going forward.

Poehler also stands out as one of the most engaging roles in the movie.

Although her time on screen is short, she really gives off a strong Leslie Knope vibe – except with leather jackets and death stares.

Moxie would have been a lot better if it leaned on Poehler some more. Early on the movie solidified her as a feminist icon, only for her daughter, Vivian, to look to Lucy as a role model instead.

The narrative really felt like it was leading to a combination of the old school and the new school to fight the patriarchy of Rockport – but alas.

Furthermore, the plot felt a little trite at times. Sure, it had standard teenage-dream-esque scenes including romantic getaways, best friend bust-ups and cinematic high-school cliches – but it wasn’t enough.

Moxie lacked that certain John Hughes touch which would have really exemplified the film’s heart.

Instead, the final act of the movie rests on its laurels and pushes through to the credits, complete with a colourful prom montage.

Moxie is a gorgeous film with incredible actors and really strong narrative backbone. Although the basis of the film has a great hook, it needed just a little more thought and perseverance to make it a real classic. Poehler’s presence is welcomed, but squandered after only giving one really involved scene. Despite this, Moxie is better than a lot of movies out there. It handles the social issues its raises intelligently and deftly and will certainly be loved by a lot of people. It is worth watching for Poehler’s ice cream-eating habits alone.

Moxie is out on Netflix tomorrow.