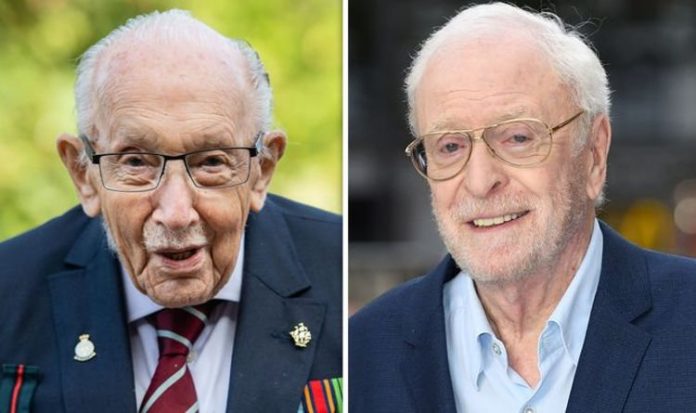 Sir Michael, 87, has been tipped to play Captain Sir Tom after the late war hero said he had his hopes pinned on the star taking the role. Captain Sir Tom died on Tuesday, after contracting pneumonia and coronavirus, at the age of 100. Last year, he raised almost £39million for NHS charities while walking 100 laps of his garden, winning over the nation’s heart.

The Army veteran made national news when his fundraising efforts started during the first lockdown, and his phrase, ‘Tomorrow will be a good day’ even trended on social media.

The Queen was one of the first to pay tribute to the hero, whom she knighted in July.

In a statement, the monarch’s spokeswoman said she recognised “the inspiration he provided for the whole nation and others across the world”.

Prime Minister Boris Johnson also tweeted a video where he said, “Captain Sir Tom Moore was a hero in the truest sense of the word”.

The flag at Downing Street was also flown at half-mast, while a tweet from the White House showed that US President Joe Biden’s office was also honouring the memory of the war hero.

As confirmed to Express.co.uk, a feature film is to start production this year after Fred Films and Powder Key Pictures secured the sought-after rights to produce an inspirational piece based on the veteran’s life.

Upon hearing the news last year, Captain Sir Tom said: “I don’t know of any 100-year-old actors but I’m sure Michael Caine or Anthony Hopkins could do a wonderful job if they were prepared to age up!”

He allegedly signed a seven-figure contract.

Fred Film’s James Spring along with Powder Keg Pictures’ Nick Moorcroft and Meg Leonard will be shooting a fast-tracked feature film based on the World War 2 veteran this year.

Writers and producers Mr Moorcroft and Ms Leonard explained: “This is a story about the power of the human spirit and Captain Sir Tom personifies that.

“We are honoured to be telling this unique and inspiring story and are excited about audiences getting to know the man behind the headlines.”

Mr Moorcroft had also promised to work “side-by-side” with the family to create a tale as close to the truth as possible.

Producer Mr Spring added: “At a time of fear and uncertainty 161 countries around the world have embraced the beacon of hope that Captain Sir Tom provided.

“We are privileged that Tom and his family have entrusted us to tell their story.”

The national treasure raised close to £39million for the NHS during the first lockdown (Image: Getty)

The companies fought for the rights to produce the film and battled rivals until securing the deal last September.

The biopic will allegedly focus on Captain Sir Tom’s relationship with his family, his long battle with skin cancer and the tragedy of when he broke his hip and was told he would never walk again.

The national treasure overcame this huge obstacle when he was 99, and decided to order a treadmill and complete laps of his garden as his rehabilitation.

The film is set to look back on his military career and examine how war shaped his life.

His daughter, Hannah Ingram-Moore, explained why they chose these particular companies to tell the veteran’s life story.

She said: “We received so many offers but what it boiled down to was trust.

A biopic of Captain Tom’s life is set to start shooting this year (Image: Getty)

“The family are big fans of the films Meg and Nick have written and produced and we hope that our story connects with audiences in the same way their previous films have done.”

Captain Sir Tom was unable to be vaccinated against coronavirus due to other medication he was taking for pneumonia, according to his family.

He had initially set out to raise just £1,000 for the NHS, but more than 1.5 million contributions meant this figure shot up well beyond what he had been expecting to fundraise.

His efforts also meant he was appointed as an honorary colonel of the Army Foundation College in Harrogate on his 100th birthday.

British Airways then paid for his flight to go on a family holiday to Barbados in December.

He became the oldest person to have a UK number one single, after he sang You’ll Never Walk Alone with Michael Ball last year.

He and his family set up The Captain Tom Foundation to continue inspiring the nation.