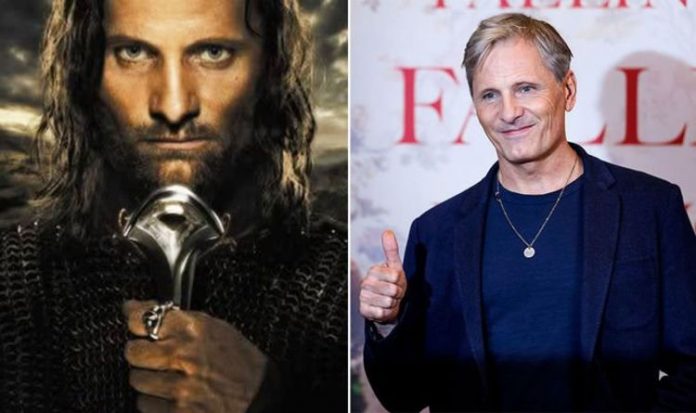 It was 20 years ago that Viggo Mortensen first starred as Aragorn in The Lord of the Rings: The Fellowship of the Ring. And now Amazon are setting a new TV show a few thousand years before in the Second Age. Sadly even the 87-year-old Aragorn wasn’t born then, but that doesn’t mean that he can’t return for a future movie or TV series set elsewhere in Tolkien’s Middle Earth universe.

In fact, Viggo himself has shared that he’d happily reprise Aragorn again for another project.

Speaking with Collider, the 62-year-old said: “Yeah, why not? Tolkien, that’s a universe.

“There are endless amounts of things you can learn and have fun adapting to the big screen or the little screen.”

Asked what he thought of the upcoming Lord of the Rings TV show, Viggo admitted he didn’t know much about what they’re doing.

The Aragorn star said: “ I know there’s shooting in New Zealand, so I assume they’re taking advantage of the people there that have gone through it, especially Peter Jackson and his team.

“I know that it’s [J A] Bayona who’s shooting it, and he’s a very good director. That’s all I know. I don’t even know who’s in it.

“I don’t know what angle they’re taking on Tolkien, or what the Tolkien estate is allowing them to shoot. I don’t even know. I don’t know anything about it, but I’m looking forward to seeing it.”

The official synopsis for Amazon’s The Lord of the Rings series sounds really intriguing.

The description reads: “Amazon Studios’ forthcoming series brings to screens for the very first time the heroic legends of the fabled Second Age of Middle-earth’s history.

“This epic drama is set thousands of years before the events of J.R.R. Tolkien’s The Hobbit and The Lord of the Rings, and will take viewers back to an era in which great powers were forged, kingdoms rose to glory and fell to ruin, unlikely heroes were tested, hope hung by the finest of threads, and the greatest villain that ever flowed from Tolkien’s pen threatened to cover all the world in darkness.

“Beginning in a time of relative peace, the series follows an ensemble cast of characters, both familiar and new, as they confront the long-feared re-emergence of evil to Middle-earth.”

The synopsis adds: “From the darkest depths of the Misty Mountains to the majestic forests of the elf-capital of Lindon, to the breathtaking island kingdom of Númenor, to the furthest reaches of the map, these kingdoms and characters will carve out legacies that live on long after they are gone.”

Similarly, Sir Ian McKellen is open to playing Gandalf once again and being thousands of years old the wizard could turn up in many times and places across Middle Earth’s history.

Just imagine if he could somehow be incorporated into the new Lord of the Rings TV show?

Back in 2019, Express.co.uk caught up with Gimli star John Rhys-Davies who initially said that The Lord of the Rings TV was a “disgrace” before realising that the project wasn’t remaking Peter Jackson’s trilogy.

Speaking with Express.co.uk, he said: “I’m not a great fantasy fan, I confess.

“I misspoke when I was asked because it was presented to me as ‘what do you think of this remake of Lord of the Rings?’ and I shot from the hip and I misspoke. It isn’t really about that at all.

“There are so many other histories attached to it and its the pre-history and the pre-setting of Middle Earth that Amazon is going to be doing and I wish them well for it.”