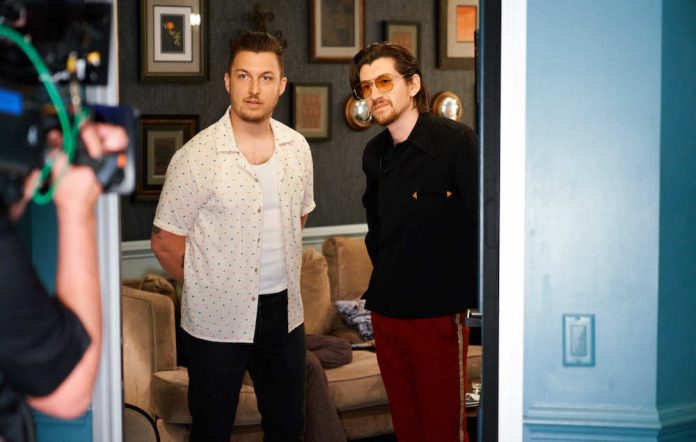 Alex Turner and Matt Helders critiqued some of their back catalogue

Arctic Monkeys have rated some of their own songs out of five.

The Sheffield band released their sixth album ‘Tranquility Base Hotel + Casino‘ last month (May 11). The record features a track called ‘Four Out Of Five’, which includes the lyrics: “I put a taqueria on the roof/It was well reviewed/Four stars out of five.”

In an interview with Jo Whiley and Simon Mayo on BBC Radio 2, frontman Alex Turner and drummer Matt Helders were asked to rate some of their own tracks out of five. After being played a clip of ‘I Bet You Look Good On The Dancefloor’, Helders commented: “There’s a few things I’d change about it now, but I don’t want to get into that. The snare’s a bit cranked.”

The pair awarded the track, which was their first release on Domino in 2005, four out of five. Next, they gave ‘Favourite Worst Nightmare‘ track ‘Brianstorm’ five out of five, with Helders reasoning: “When one of my friends who’s not in a band first heard it, he said it was the best thing he’d ever heard.”

‘Snap Out Of It’, which featured on 2013’s ‘AM’, was also given four, while the last track to be judged was the band’s 2006 cover of Girls Aloud‘s ‘Love Machine’. “You know, Jo, that we didn’t actually write ‘Love Machine’,” Turner joked, before referencing the fact they’d just requested the station play Barry Manilow’s ‘Could It Be Magic’. “It were actually a Barry Manilow song.”

“I think the performance were a two out of five,” Helders critiqued. “That’s the charm of it, though,” Turner replied.

Meanwhile, Arctic Monkeys performed ‘Tranquility Base’ closer ‘The Ultracheese’ for the first time last night (June 18). The song made its debut appearance in the band’s setlist as they performed at the Ascend Amphitheatre in Nashville, Tennessee.

The group will return to the UK next month to headline Glasgow’s TRNSMT Festival, before embarking on a run of headline shows in September. Remaining tickets are available to purchase here.