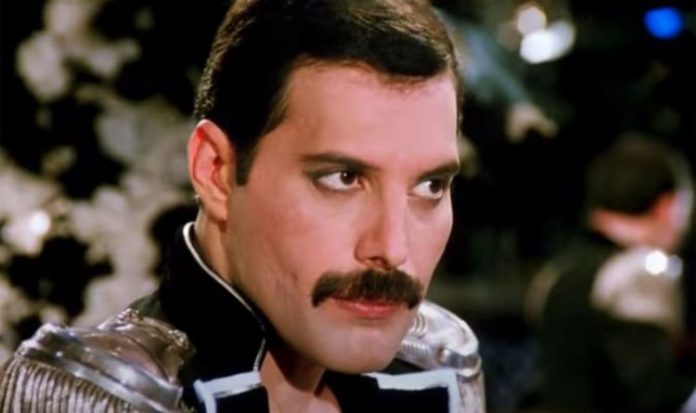 Freddie loved his home and garden in West Kensington, his cats and dressing up. So it is fitting that the very final pictures taken of him show just that. Taken in August 1991, three months before he passed away, they show the Bohemian Rhapsody icon looking noticeably thinner but no less stylish. Touchingly, the impromptu shoot was a total surprise to Jim who had been pottering in the garden and taking pictures when his partner surprised him with a rare and spontaneous appearance outside before his failing health left him bedbound.

What is so touching is how much effort Freddie had made. His close friend and live-in PA, Peter Freestone described to Express Online how casual Freddie liked to be at home, even in full health.

Peter says: “Freddie at home alone with us would be sitting in a mismatched tracksuit on the sofa watching Countdown…

“There were many layers. Friends would come to lunch and a slightly different Freddie Mercury would appear. It was more real and playful than you would see with the fans outside the door but still different, slightly dialled up and switched on. He loved entertaining friends. He would put on a matching tracksuit…”

But this time, even with nobody coming to visit, Freddie pulled out the stops and dressed himself up, perhaps for the last time.

It is clear that the smart blue trousers and patterned floral shirt were chosen on purpose by Freddie.

He wanted to look nice for the moment and for Jim. In doing so, he also left one last wonderful memory to the world.

Hutton recalled the moment in his autobiography, Freddie And Me. He had thought Freddie was resting inside.

Suddenly, the Queen star appeared, smartly dressed and groomed. Even then, though, conscious of how his appearance had been affected by his illness, he asked to be snapped at a small distance.

It is rather fitting that one of Freddie’s beloved cats has also snuck into the pictures. The star had at least ten through his adult life and six were there with him at the end – Delilah, Goliath, Lily, Miko, Oscar and Romeo.

Freddie’s close friend and PA Peter Freestone, who also lived with them at One Garden Lodge, described another perfect moment in the garden.

By 1991, Freddie battle with AIDS had robbed him of the use of one of his feet and Peter was also suffering from gout, so he tells the gently amusing story of the two of them propped up in the garden, one sunny afternoon.

Peter wrote: “It was late spring in 1991, the magnolia blossom on the trees was in full bloom. I was suffering yet another attack of gout, this time in my ankle.

“Freddie arranged for two big wicker chairs from the conservatory to be brought out into the garden, along with one of the accompanying stools and placed beneath the magnolia. It must have made quite the picture, with of us invalids sitting in the capacious armchairs, each with our afflicted foot placed on the footstool, the sunlight playing down through the leaves and flowers above his.

“He had an arrangement of magazines put out and drinks so that we wouldn’t have to move anywhere. We spent a couple of hours there, talking about nothing in particular.”

Both moments in the garden are the perfect way to remember Freddie, smiling in the sunshine, surrounded by everything and everyone he loved.