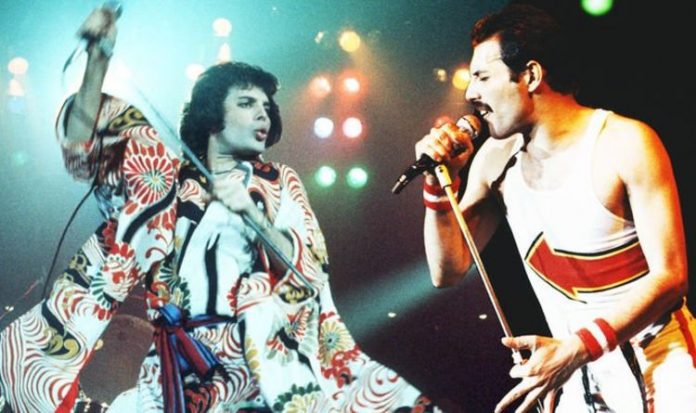 Freddie Mercury’s songwriting talents are well documented, and he was the brains behind much of Queen’s biggest hits. He was posthumously inducted into the Songwriters Hall of Fame with the band, as well as winning an Ivor Novello Award for their work. Express.co.uk delves into the story behind one of their greatest hits, Bohemian Rhapsody.

Bohemian Rhapsody is one of the most iconic rock songs of all time – but it was certainly not usual fare when it was written.

According to Freddie’s friend Chris Smith, with whom he performed before Queen got big, Freddie began work on it in the 1960s and composed it on the piano.

He recalled in Queen: Days of our Lives, how Freddie would play parts of different songs together and one of them, known as The Cowboy Song, ended up being included with its lyrics “Mama, just killed a man.”

Brian May, Queen’s guitarist, said most of the work on the song was done in the studio rather than beforehand, however in the BBC documentary The Story of Bohemian Rhapsody, he said the whole composition was “in Freddie’s mind” before they even started.

“The middle part started off being just a couple of seconds, but Freddie kept coming in with more Galileos and we kept on adding to the opera section, and it just got bigger and bigger.

“We never stopped laughing… It started off as a ballad, but the end was heavy.”

Speaking to the New York Times, Brian said he was never entirely sure of what the song was meant to be about, and Freddie would never explain what the song actually meant, only that it was about “relationships.”

He said in 2005: “I have a perfectly clear idea of what was in Freddie’s mind.

“But it was unwritten law among us in those days that the real core of a song lyric was a private matter for the composer, whoever that might be. So I still respect that.”

However, the best way to understand the song is through the words of the man himself, who said in an interview in Sydney in 1985: “We had so much hunger. We had so much that we wanted to bring out, it was all sort of kept in.

“So we had all kinds of songs and Bohemian Rhapsody happened to be, it was basically three songs that I wanted to put out and I just put the three together.

“It had a very big risk factor, the radios didn’t like it initially because it was too long and the record company said, ‘You can’t market it that way.’

“I said, ‘It either goes out in its entirety or not at all.’”

While we may never understand what the lyrics of the song meant, or whether the concept was a fully formed idea, or just the workings of a band in a studio, it was a sure fire hit.

The song started slow due to reduced radio play, but soon it became a hugely requested song, forcing DJs to play the tune.

Despite being released in October, it was the 1975 UK Christmas number one and is the first song to win this accolade twice, going to the top of the chart again in 1991 after Freddie’s death.

The track was less of a success in America, though still wildly successful, but came back into circulation in 1992 when the movie Wayne’s World utilised the song in its opening, winning the band their only MTV Video Music Award.