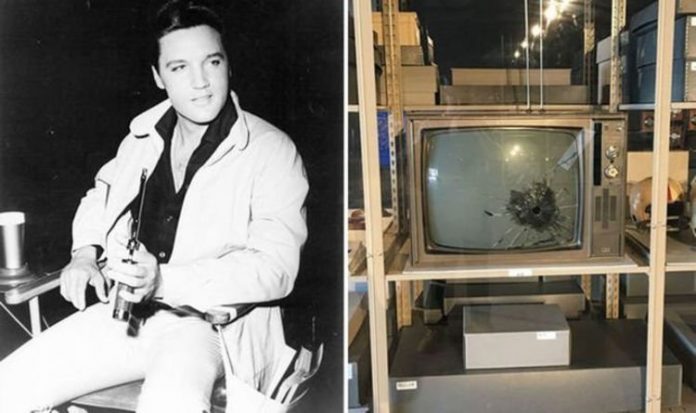 During the 1970s, Elvis Presley became rather obsessed with guns and famously shot some of his TVs. One of the sets is on display at Graceland with the bullet hole seen quite clearly through it. According to Elvis expert and archivist Angie Marchese on a recent virtual live tour of The King’s house, the star was watching Robert Goulet in his Palm Springs house when he decided to open fire.

Angie shared: “It’s true, Robert Goulet was on TV and the actual bullet that was in the TV missed all the tubes.

“This TV still does work and the bullet that was inside the TV is part of the collection.

“We actually went inside to preserve this screen and epoxied it so those cracks would not spread anymore.”

Goulet was an American singer and Broadway star who was actually a friend of Elvis.

Speaking with the Associated Press in 2006, Graceland spokesman Kevin Kern said: “There was nothing Elvis had against Robert Goulet.

“They were friends. But Elvis just shot out things on a random basis.”

The King’s cousin and Memphis Mafia member Billy Smith agrees saying in 2018: “Most the time ‘cause he wanted to! It might be something he saw on TV or it might of been something that bothered him.

“A lot of times you had to wait a little later until Elvis kinda went through whatever was bothering him and then he would he would tell you.”

When fans visit Graceland they can see the famous TV room. Inside the black and yellow decorated space are three television sets mounted into the wall next to each other.

Elvis had the idea from President Lyndon B Johnson who would watch different news networks at the same time in the White House.

In another video, Billy Smith’s wife Jo remembered how Elvis would take a gun to bed upstairs at Graceland.

The Memphis Mafia member said: “He always kept one on his nightstand.”

Jo remembered how when they hung out in Elvis’ bedroom he’d sometimes even joke around with the gun, reaching for the weapon in jest if they said he wasn’t right about something in a conversation.

Elvis had at least a couple of TVs in his bedroom, with one at the end of his massive oversized bed and one in the ceiling so he could watch TV lying down.

Graceland’s upstairs, including The King’s bedroom, remain off-limits to the public to this day but the rooms up there are preserved like he just got up and left.