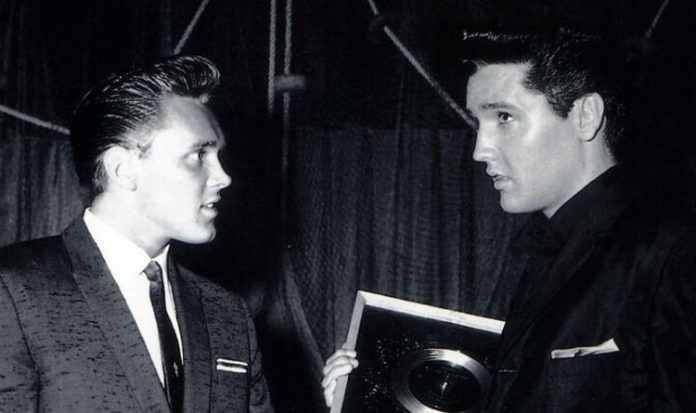 Billy was one of the UK’s biggest stars in the 1960’s and matched the Beatles’ record of 24 chart hits through the decade. However, the lad from Liverpool is much more closely associated with Elvis, both in his looks and his music, and a short-lived foray into films. After they met, The King himself enthusiastically told the press, “I’ve heard about Billy here. I understand he’s right at the top in Britain.” Billy, meanwhile raved, “What a wonderful guy!” But what really happened that day?

Billy hit the UK Top 10 in 1959 with the self-penned Colette and he quickly became the latest teen idol. In 1961 he had three Top Five hits, Halfway to Paradise, Jealousy and I’d Never Find Another You.

His manager, Larry Parnes, was keen to capitalise on the British ‘blond Elvis’ tag by getting the two icons together, but, apart from his military service in Germany, the US superstar never left the country.

A chance came in 1962. DJ Jimmy Savile was supposed to fly over to present Elvis with some silver discs but couldn’t make it so Parnes suggested Billy could do it during a planned US trip to promote his debut film Play It Cool.

Billy was able to observe Elvis at work and said: “Around the set, he was very interesting to watch. Elvis moves about stealthily, almost like an animal! He’s cool man. Very relaxed.”

During a break in filming, they were introduced and the official photographs show the stars smiling as Billy gave Elvis the silver discs for the hits Rock-A-Hula Baby and Wild In The Country.

The British singer later said: “When I met Elvis I was bowled over! I reckon he must be the most handsome guy in show biz! Perhaps I’m biased but that’s because I’m an Elvis fan…

“What I liked about Elvis was his terribly polite manners and the way he said “Hi Billy”, as if he had been my cousin or something, and he hadn’t seen me for a few months.”

Elvis said: “He (Billy) seemed like a very nice boy. We didn’t have a chance to talk much because I had to work. But from my impression he’s just great…

“I understand he’s going great over there (in the UK). Before I met him I’d heard that he was the tops in Britain. I tell you, I’d sure like to meet him again.”

But Elvis also confessed to journalist Chris Hutchins, who later became a friend when he PR’d Tom Jones, that he was mystified by Billy’s behaviour when it was just the two of them together.

Hutchins recalled: “Elvis told me this later – and I had this from the very man’s lips – that he (Billy) just stayed on the set all day and never said a word and never spoke to him.

“Elvis was very confused about that, (saying) ‘Why did this kid come all the way to meet me and he didn’t say anything?'”

Billy described the encounter slightly differently but it was clear they had barely spoken, despite Billy being there for most of the day.

Billy was interviewed by chat show host Russell Harty. Nobody could know at the time that it was just months before his sudden death from a heart attack on January 28, 1983.

He said: “I’ve been shy all my life and missed out meeting great people and great musical experiences because of my shyness…

“I was born shy, I was born with four brick walls around me. I guess I’ve managed to knock down one at the moment. I’ve always felt enclosed…

“I build them around me mentally because of my shyness. People used to think I was very, very moody because I wouldn’t hardly say anything. I just looked down at my shoes.”