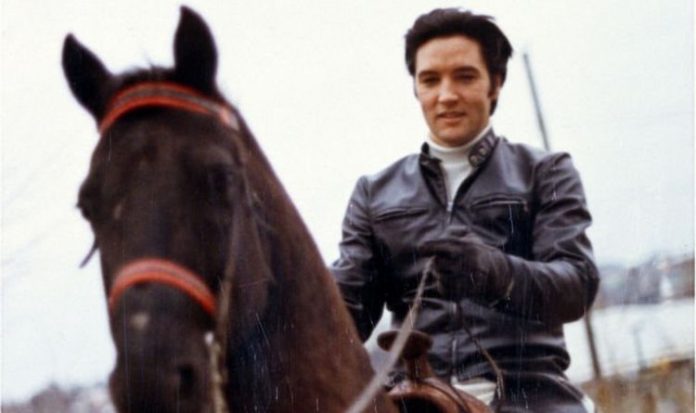 The King of Rock and Roll moved into Graceland in March 1957. The 10,000 square foot property is situated in Memphis, Tennessee and was bought by Elvis Presley when he was 22-years-old. The star had a lot of room and land for animals – one of his biggest loves in life.

By the end of 1960 Elvis had amassed a large collection of animals from around the world.

Included in this collection was a monkey, a family of spider monkeys, peacocks, poodles and a large Great Pyrenees dog named Muffin.

The King also had a Chow Chow dog named Get Low who outlived the star by a year.

Shortly after the singer moved into his home in 1957 he filled his barns with pigs and chickens.

Elvis then decided he wanted some geese for his land, so the star jumped in his Cadillac and drove out to the country.

The King filled his back seats with geese and drove back to Graceland to expand his farmyard animal collection where they could “keep the lawn trim”.

The geese were in good company after later being joined by a trip of goats and a flock of turkeys – one of which was named Bow Tie.

These barnyard animals were later joined by a family of donkeys who were kept in the drained Graceland swimming pool until work was finished on the lot.

Stray felines turned up on the Graceland grounds over the years, but Elvis made efforts to rehome them where he could.

He did reportedly keep one around named Wendell, however. The cat was apparently named after his co-star Wendell Corey, who appeared in the 1957 film Loving You alongside the King.

The Jailhouse Rock singer also had a particular fascination with peacocks.

Not only did he have a fleet of them on his grounds at all times, he also had some stained glass peacock panels custom designed for him in 1974 by his girlfriend Linda Thompson.

The stained glass windows still stand to this day, but the star was forced to ban the live peacocks from his house.

During a virtual tour of Graceland Elvis expert Angie Marchese revealed: “There were actually some pet peacocks that ran around the property here at Graceland at one point.

“That was until they started seeing their reflection in the gold Cadillac and started pecking the paint off the car.”

After this event Elvis sent all of the peacocks away to live at Memphis Zoo.