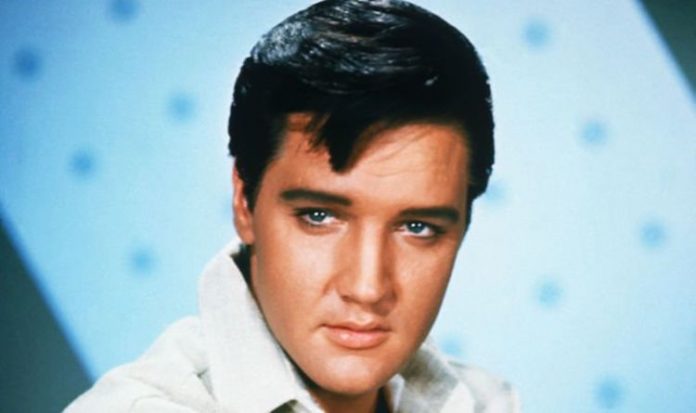 These days, the phrase “Elvis has left the building” has become utterly ubiquitous. It can mean anything from signifying (often ironically or sarcastically) that someone has, indeed, left a room or building to meaning the end of a moment, relationship or even life. It’s no surprise it is associate with the final tragic days of The King’s own life, but it is actually from the very beginning of his career on the Louisiana Hayride, from the moment when he was poised to become one of the biggest stars the world has ever seen.

On this day, March 3, in 1955, Elvis made his local TV debut, broadcast on KWKH-TV from the Municipal Auditorium in Shreveport, Louisiana.

It was part of the Louisiana Hayride, a country music show which operated live shows which had been broadcast on local radio since 1948.

Elvis had made his first-ever radio broadcast for them on October 16, 1954. He was still only 19 at the time, so his parents Vernon and Gladys had to co-sign his contract. He was paid $18 for his weekly appearances.

When his contract was renegotiated in October 1955, his rate had soared to $200, an enormous amount at the time but reflecting his fast-rising fame.

Elvis performs at the Louisiana Hayride in 1954 (Image: GETTY)

Elvis performs at the Louisiana Hayride in 1954 (Image: GETTY)

His national debut single Heartbreak Hotel was released in January 1956 and topped the charts, followed by his self-titled album in March. It held the Number 1 spot for ten weeks.

Parker needed Elvis free for TV appearances and national touring and bought him out of his Louisiana Hayride contact for $10,000.

The one proviso was that Elvis still had to play one charity concert for them in December 1956.

That year, on top of his final eight appearances on the Hayride, Elvis also performed 143 concerts in 79 cities, as well as 11 appearances on national network television.

BELOW: LISTEN TO ELVIS’ FIRST EVER LOUISIANA HAYRIDE RADIO BROADCAST SOUNDING VERY YOUNG AND WITH A BROAD MEMPHIS ACCENT

By the end of 1956, Elvis had also filmed his first movie, Love Me tender and released a second chart-topping album, simply called Elvis.

He was fast becoming one of the biggest stars in the country. Furthermore, the hysteria he generated at every appearance was unprecedented at that time.

All of this was building towards the very simple and very necessary reason why the most famous quote of his career was coined that December.

DON’T MISS
Elvis Presley’s WALKOUT after awkward meeting with Brian Wilson (REPORT)
Elvis The Man That Rocked The World: What did critics think of Elvis? (INSIGHT)
Elvis’ daughter Lisa Marie haunted by Graceland’s ‘damn back lawn’ and what lies beneath (INTERVIEW)

Elvis, now well-known by his nickname ‘Elvis the Pelvis’, had to honour his commitment to the Louisiana Hayride Christmas fundraiser for the local YMCA.

His sudden fame meant the event was moved from Municipal Auditorium to the Youth Center at the Louisiana State Fairgrounds. When he had started out, tickets to the entire show had cost 60 cents, now they were $2.

The local press reported how Elvis-mania had gripped the town: “It was a big night for the Shreveport police force, too… With teen-agers giving every indication of tearing the Pelvis limb from limb out of sheer admiration and animal spirits, the police threw up more or less effective barricades throughout the building. They were effective enough to keep Presley from being mobbed, but just barely.

“It required considerable agility to keep up with him as he fled from one room to another—always a step or two ahead of his admirers.”

Elvis’ parents Vernon and Gladys had to co-sign his early contracts (Image: GETTY)

When he finally made it on stage to deafening screams, The King (already a budding style icon) rocked white shoes with blue soles, a green coat, blue pants, and white shirt, a tie and silk scarf.

The King performed Heartbreak Hotel, Long Tall Sally, I Was The One, Love Me Tender, Don’t Be Cruel, Love Me, I Got A Woman, When My Blue Moon Turns To Gold Again, Paralyzed and Hound Dog.

Elvis played his set mid-way through the night and the host Horace Logan found it impossible to quiet and calm the crowd after he came off stage so the next acts could perform.

In desperation, Logan told the crowd: “All right, all right, Elvis has left the building.

“I’ve told you absolutely straight up to this point. You know that. He has left the building. He left the stage and went out the back with the policemen and he is now gone from the building.”

It was a phrase frequently broadcast at the end of Elvis shows for the rest of his career to persuade crowds screaming for encores to leave the building themselves. Like his music, the phrase has lived on, testimony to his extraordinary legacy.