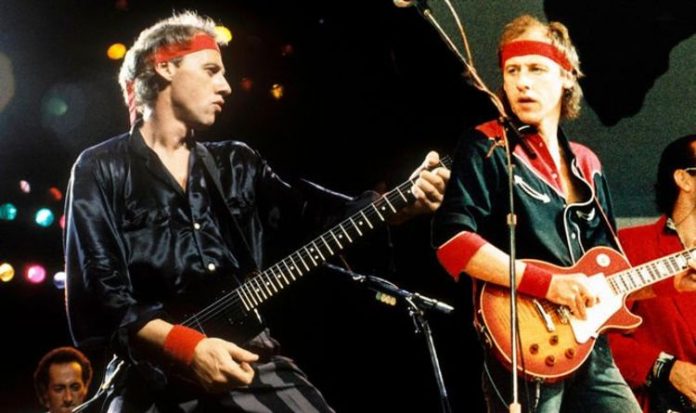 Dire Straits started out with brother Mark and David Knopfler, who founded the group with John Illsley and Pick Withers. Each of them had their own careers or were studying at university when the band came about, and they were quickly snapped up by a record company. Throughout their career they pushed the boundaries of rock and released a great many records until they disbanded in 1996.

How many albums have Dire Straits made?

Since their work together began in 1977, Dire Straits have released six albums.

Given they were only together for just shy of 20 years, this would average around one album every three years, which is a slower output than many bands which existed during their time.

Their first eponymous album, released in 1978, included one of their biggest hits, Sultans of Swing.

The album went to Number Five in the UK and Number Two in the USA, while topping the charts in Australia and in Europe.

The record’s main single was what really helped them to become household names, as it got to Number 4 in the USA’s Billboard Hot 100 and Number Eight in the UK chart.

Overall, the album has gone double platinum, which made it one of their bestselling albums.

The record was followed by 1979’s Communiqué, which was less successful but still went into the Top 20 of different worldwide charts.

Its lead single, Lady Writer, was also not as successful as Sultans of Swing, which still remains one of the band’s best-known songs.

The band’s third album came with a line-up change, as David, one of the band’s co-founders, left the group to become a solo artist and was replaced.

This album performed better in Europe and the UK than Communiqué, however it did not hit home as well with American audiences.

Nevertheless, the band continued, though the release of the fourth album Love Over Gold was marred by the departure of Pick, who left to pursue jazz drumming more specifically and spend time with family.

Pick was replaced and Mark remained as the band’s main musical director, but their most successful album was soon to come, with Brothers in Arms being released in 1985.

The album won two Grammys (one for the original release and another years later for an anniversary edition) as well as the Best British Album award at the BRITs.

The album was the first to go 10-times platinum in the UK and is one of the best-selling albums in UK chart history.

The record is estimated to have sold more than 30million copies all over the world, making it one of the best-selling albums ever.

Despite this, it was still a moment of disquiet for the band, as various people in the group came and went, with John and Mark remaining the only founders left in the band.

Their final album On Every Street came out in 1991 and went to the top of the UK chart, as well as various others in Australia and Europe.

Ultimately, while the album was similarly successful to others before it, this was not enough to keep the ever-changing group together, and in 1995, the group disbanded and the members began solo work.