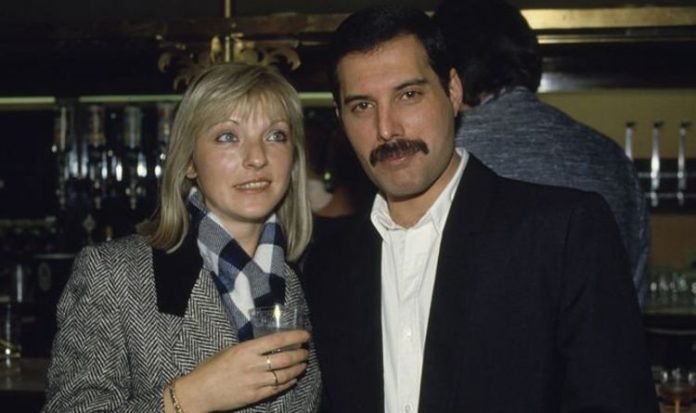 Love Of My Life was written in 1975 and appears on the legendary A Night At The Opera album, alongside Bohemian Rhapsody. It was never released as a single but has achieved iconic status and is widely seen as Freddie’s declaration of devotion to Mary, a woman he called his “common-law wife” and, indeed, “love of my life” long after they were no longer a couple. But some, including apparently Queen’s manager John Reid, believe it was written for the man Freddie left Mary for.

Freddie and Mary split up in 1976 and she later confessed she had suspected he was seeing another woman.

Although they had to hide their relationship from the public, Freddie bought them an apartment to live in together. Postcards the Queen star sent his lover whenever he was away on tour reveal the depth of his passion and devotion.

Freddie wrote: “My dearest and precious cherub, I thought I’d finally get it together and write you my first little card.

“Hope all’s going well with you and go easy on those business lunches or you’re going to burst before I can get back to you. You’re going to get into one of my coat-suits if it kills you (probably will).

Freddie tells David the tour is going well before ending: “I can’t wait to get back. Love you and miss you madly.

“My love to everyone back home and take special care of yourself my dear.”

He ends with: “Oodles of love and kisses.”

David recalled tehy met: “At Rod’s, a club next to the Furniture Cave past World’s End in the Kings Road… he told me mainly about the recordings which were by this time quite well advanced and which [was] Queen’s fourth album, A Night at the Opera.

“I remember him telling me before we said goodbye that night that he often despaired of ever seeing it finished as the recordings had been going on for so long.”

The recording sessions for the album took place from August to September 1975 at Rockfield in Monmouthshire, Wales. If they were “well advanced” this means it is likely David and Freddie met in September.

David added: “It was not until three or four weeks later that I picked up the phone. He was delighted that I’d called.”

This would presumably mean Love of My Life was already written and being recorded by the time Freddie started dating the American.

Closer examination of the lyrics reveals another truth. Despite the themes of undying love, this is a break-up song.

In late 1975, Freddie was in the first flush of besotted love, exploring being in a relationship with a man. The song is bittersweet and melancholy. At the time it was far more appropriate to what was happening with Mary.

In the long term, it would also stay totally true to Freddie and Mary’s relationship. Until the very day he died, Mary was by his side, loving him and loved by him. Even though they were both in relationships with other people, their love transcended everything and lasted the whole of his life.