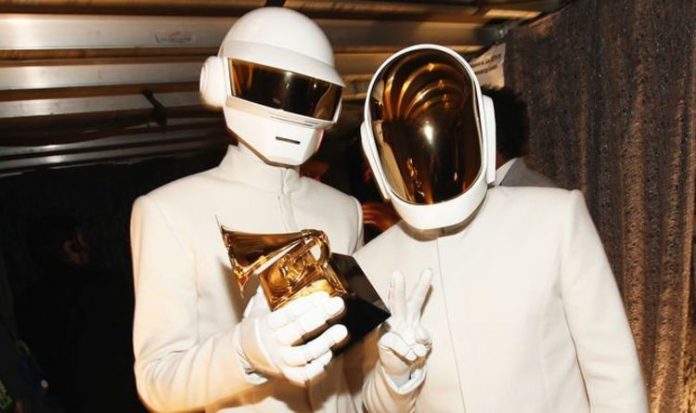 Earlier today, the band’s publicist confirmed the news after the release of a farewell video, Epilogue. The news came as a shock to fans around the world, even though the band has not released any new material together since 2013. But then, they have only produced four studio albums across the 28 years they have been together as Daft Punk. Around the time of their debut 1997 album, Homework, Thomas Bangalter and Guy-Manuel de Homem-Christo also began to hide their faces.

Even though they have appeared in public with masks or helmets since then, there is one easy way to tell them apart – Thomas is notably taller.

They announced the split by rereleasing video footage from the 2013 album Random Access Memories where their helmets are also colour-coded – gold for Guy-Manuel and silver for Thomas.

And one other piece of trivia before we look behind the masks: their 2013 smash paid hommage to the funk and dance sounds of the 1970s and 1980s but did you know that Thomas’ father wrote the 1979 European chart topper D.I.S.C.O. by Ottawan?

Daft Punk bandmates Guy and Thomas met in 1987 at secondary school in Paris.

In 1992, they started a short-lived pop-rock trio called Darlin’ with Laurent Brancowitz. All three played guitar but they found little success.

Thoams later said: “The rock n’ roll thing we did was pretty average, I think. It was so brief, maybe six months, four songs and two gigs and that was it.”

Perhaps the most important thing to come out of the experience was a bad review from Melody Maker which called their music “a daft punky thrash.”

Thomas and Guy-Manuel ended the band but kept the inspiration for a new name.

Asked in 2013 about why they always wore masks, Daft Punk said it was inspired by the mythos of superheroes.

Thomas said: “I remember when I was a kid, I would watch Superman, and I was super into the feeling of knowing that Clark Kent is Superman and no one knows.

“We always thought as we were shaping this thing that the fantasy was actually so much more exciting than the idea of being the most famous person in the world.”

The duo stressed, however, that they step away from the masks and all they represent in their personal lives.

Guy-Manuel said: “We work a lot, but we are not in the superhero costume…”

And Thomas finished it for him: “Every day.”

They have avoided the limelight and interviews throughout their careers but have been papped in public occasionally and even more occasionally at official events.

Thomas is reported to be the one who talks more in interviews and has lived slightly more in the public eye, marrying French actress Elodie Bouchez.

The couple have two sons, Tar-Jay and Roxan, and split their time between Los Angeles and Paris.

Thomas has his own record label, Roulé, composes music for films and had a major hit in 1998, Music Sounds Better with You, with the trio Stardust

Guy-Manuel also has his own label, Crydamour (a play on the French term ‘Crie d’amour’ or ‘cry of love’). Very little is known about his private life except that he has two children.