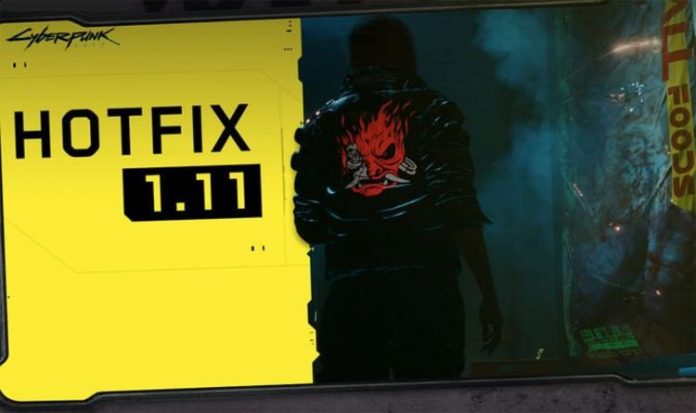 Unfortunately, however, the new update doesn’t make any sweeping changes, but rather fixes some of the issues that appeared after last week’s download.

Cyberpunk 2077 update 1.11 was announced by CD Projekt on Twitter: “Hotfix 1.11 is available on PC, consoles and Stadia!

“This update restores item randomisation and fixes a bug which affected some users’ holocall with Takemura in Down on the Street quest.”

As you can see from the patch notes below, CD Projekt is investigating a new loot exploit caused by saving and loading.

The studio has also fixed a bug in the Down on the Street quest, which occurred following a holocall with Takemura.

After the release of update 1.1, some fans were missing dialogue options when on the call with the character.

Likewise, NPC interactions were also blocked as part of the annoying Cyberpunk 2077 glitch.

You can see the full Cyberpunk 1.11 PS4, Xbox One, PC and Google Stadia patch notes below…

Hotfix 1.11 is available on PC, consoles and Stadia!

This update addresses two issues that appeared after Patch 1.1:

• Item randomization has been restored to the previous state.

• The save/load loot exploit will be investigated further.

• A bug in Down on the Street quest has been fixed.

– It occurred for some players during a holocall with Takemura, when using a save made on version 1.06 with Down on the Street quest in progress at “Wait For Takemura’s call” objective.

– After loading such a save on version 1.1, the holocall would lack dialogue options and block interactions with other NPCs.

After going quiet over the Christmas period, it’s been a busy few weeks for the team at CD Projekt.

Cyberpunk received its first major update last week, which was followed by the release of official modding tools and resources for the community.

According to CD Projekt, the tools will be updated to ensure compatibility with future patches.

“Below you will find official tools and resources that will help you modify and create your own experiences in the world of Cyberpunk 2077,” reads a CD Projekt statement.

“Tools will be continuously updated alongside with game patches to ensure compatibility.”