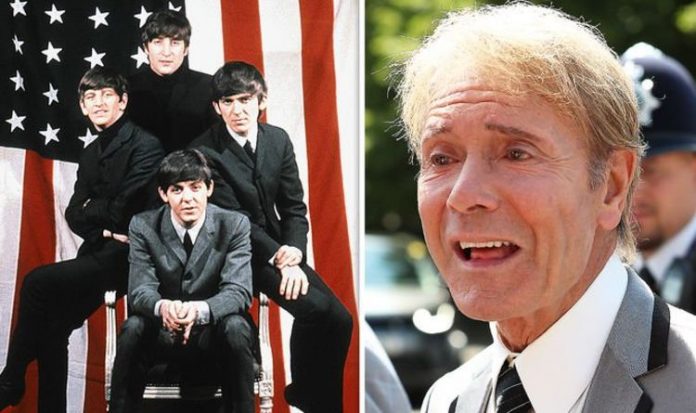 The Summer Holiday singer is one of the nation’s best-selling artists but his success has always been overshadowed by the Fab Four. After hearing the Liverpool band for the first time, Sir Cliff admitted that he didn’t think they were “anything special” but was soon proved wrong. While the 80-year-old has sold more than 21.5 million singles in the UK, he remains in third place behind The Beatles and Elvis Presley in UK Singles Chart history.

Sir Cliff wasn’t impressed when he listened to an early cover of “some old track” by The Beatles and commented that they “hadn’t sounded very good at all”.

He was surprised when Sir Paul McCartney explained that the band had travelled to Hamburg, Germany, because Sir Cliff had the charts “sewn up in Britain”.

Sir Cliff said: “I knew we were doing well, but I didn’t know we were forcing our competition to emigrate!”

After The Beatles returned from their 1962 trip, Sir Cliff was amazed at how much they had changed and said they “blew everybody away”.

Sir Cliff had become an “unofficial PR man” for the band while he toured South Africa and other nations by asking DJs to play their songs.

Cliff Richard unleashed a furious rant over The Beatles’ success in the US (Image: GETTY)

Cliff Richard was jealous of The Beatles success in the US after their Ed Sullivan Show appearance (Image: GETTY)

While he seemed to be a cheerleader for The Beatles, he also kept a close eye on how well his “musical arch-rivals” were doing in the charts.

For years, Sir Cliff had hoped to break the US and claimed it was “the holy grail for artists and record labels”.

But a series of unfortunate events meant fame across the pond never materialised, which the singer explained in his 2020 autobiography Cliff Richard: The Dreamer.

Shortly after the release of his film The Young Ones in 1961, he was invited onto The Ed Sullivan Show.

Sir Cliff said: “It was a huge deal – or, rather, it should have been.”

JUST IN: Cliff Richard ‘forced rivals The Beatles to emigrate’ over success

Cliff Richard longed to be a hit in the US and considered it the ‘holy grail’ (Image: GETTY)

The US talk show was watched by up to 30 million people each week and helped The Beatles “break America” in 1964.

However, Sir Cliff’s experience was “hugely disappointing” because Sullivan wanted him to perform “corny” songs and “was never going to budge” on his decision.

The singer vented: “He let me do 30 seconds of Living Doll, a Top 30 US hit, but then I had to put on a bowler hat and tie-and-tails for the music hall number.

“It was so frustrating! Here I was live on American TV, chirping this kind of vaudeville number that rock and roll had just killed off in England!”

A number of “jinxed tours” followed and Sir Cliff felt bitter about The Beatles’ being turned into a “successful export”.

Cliff Richard admitted that he is still mobbed by fans in the UK – but in the US he has ‘anonymity’ (Image: GETTY)

Sir Cliff claimed that their record label executives were “much cannier” than his, who he branded “somewhat lackadaisical”.

He said: “They hardly tried to support me in breaking the States, The Beatles label bosses were far more proactive.

“When the band flew into JFK Airport at the start of 1964 [their manager] Brian Epstein – it is rumoured – paid thousands of girls to scream at them.

“It really announced their arrival.”

The Beatles went on to “take the US by storm” and over time Sir Cliff grew “fed-up of their ubiquity”.

Sir Cliff said: “The wind was behind them and this was their moment. I didn’t begrudge The Beatles anything.

“They were a fantastic band who wrote amazing songs and they deserved all they got.”

But Sir Cliff’s frustration led to a furious rant at then-manager Peter Gormley, where he moaned: “Every time I open a paper, all I read about is The Beatles.

“It’s ridiculous! Has everyone forgotten me? What’s going on?”

Mr Gormley tried to calm down the star by asking if he was “still performing”, “selling out concerts” and getting Top 10 hits.

Sir Cliff feebly replied “yes” to all of his questions.

Mr Gormley said: “So what the bloody hell are you worrying for then, mate? There’s room for everyone.”

Upon reflection, Sir Cliff conceded: “He was absolutely right of course.

“I was still doing incredibly well and The Beatles’ success was a daft thing for me to get het [sic] up about.”

Sir Cliff’s jealousy of The Beatles returned when he begged Rupert Perry, a senior executive at EMI, for “one more go” at breaking the US.

Sir Cliff said he would “never forget” his response, which made him realise he was not his “record label’s priority”.

Mr Perry said: “Calm down Cliff… I’m sorry to tell you this, but I think I have to. EMI America is simply not excited by Cliff Richard material.”

Sir Cliff was “grateful” for his colleague’s honesty but found it “saddening and, in a way, it broke my heart” because he “didn’t understand” why.

Years later, Sir Elton John and Eric Clapton probed him further on the point and pointed out that he “was there before” anyone else.

Cliff Richard and Paul McCartney are now friends and have performed together a handful of times (Image: GETTY)

Sir Cliff recalled: “Elton said, ‘What’s the story? You should have been big there?’ ‘Tell me about it!’ I sighed. ‘I just don’t know!’”

However, now he claimed to be “kind of pleased” that he never broke the US because it’s the “one place” he can “have something approaching a normal life”.

Sir Cliff said that he “loved” meeting fans in the UK but it was “hard” to conduct his business – but in the US, he “never gets a second glance”.

He continued: “If a British ex-pat happens to clock me, we take a selfie and I walk on. Today, on the whole, I’m grateful for this anonymity.”