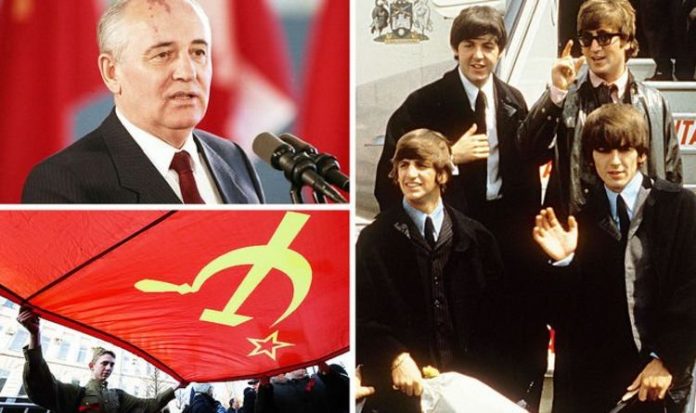 Astrid Kirchherr discusses comic about The Beatles in 2010

Fans of the Fab Four remembered John Lennon this week on the 40th anniversary of his death, when he was fatally shot four times in the back by Mark Chapman in New York. The Beatles left an indelible mark on music during eight years together, when they released 188 original songs and 25 covers. Now, a link between the Liverpudlian band and the Soviet Union’s downfall has been revealed by a friend of John.

Rod Davis knew the deceased singer-songwriter from the age of five, when they both attended Sunday school at St Peter’s Church, in Woolton, Liverpool.

They grew closer in Quarry Bank High School through John’s cheeky antics in class including making cardboard dog collars for everyone in a religious studies lesson.

Mr Davis was part of the original line-up for John’s old band The Quarrymen and soon he met Paul McCartney – a moment that would change the history of music.

After that seminal moment, the band reformed with Mr Davis’ distrust of the rock and roll genre leading him to leave the skiffle group.

Now The Quarrymen perform around the world and last took to the stage in Germany on October 9, which would have been John’s 80th birthday.

Beatles: John Lennon was remember on Tuesday (December 8), the 40th anniversary of his death (Image: GETTY)

During Mr Davis’ travels, he met a number of Beatles fans in Russia who believed the band helped “dismantle the Soviet Union”.

He told Express.co.uk: “People say, ‘You must be joking,’ but they believe it over there.

“We met a few people while playing in Russia and they seemed convinced that The Beatles’ music had something to do with it.”

Music of The Beatles, The Rolling Stones and others was banned in the nation during that era because of the fear that it was “subversive”.

Beatles records were hard, but not impossible, to get a hold of on the black market, where they would sell for the equivalent of two week’s wages, the BBC reported in 2012.

Beatles: John Lennon died on December 8, 1980, after Mark Chapman shot him outside The Dakota, US (Image: GETTY)

Sailors, actors and diplomats were all said to have smuggled the records into the state – and if they would have been discovered, their right to travel would have been revoked.

Mr Davis told Express.co.uk: “It may sound stupid to people over here but we met quite a few people in Russia who said the influence of The Beatles’ music definitely helped to dismantle the Soviet Union.

“Partly because they had been told that all Beatles records were ‘decadent and subversive’.

“Then, when they heard them, it was the early-Beatles songs about boy meets girl and June moon, tune stuff.

“They wondered why the party was being so critical and it started to erode the credibility of the Soviet Union’s regime.”

Mr Davis went on to watch the 2009 documentary How The Beatles Rocked the Kremlin, which further explored the effects of Beatlemania behind the Iron Curtain.

Due to vinyl being “scarce and expensive” in the Soviet Union, citizens concocted their own unique way to produce flexi disc records.

Using discarded X-ray scans from Soviet hospitals, music could be pressed onto them with a modified record player.

Mr Davis told Express.co.uk: “You get an X-ray photo of bones on thick plastic stuff and made flexi disc out of them, it was known as ‘making music on the bones.’”

Beatles: Rod Davis left The Quarrymen when they changed from skiffle music to a rock and roll (Image: ROD DAVIS / GETTY)

He met a Ukrainian fan who put together an exhibit of “Soviet-era Beatles stuff”, which included handwritten lyrics and the make-shift records, often displaying broken bones.

Mr Davis recalled: “It was a really dangerous thing to do, there had been some recordings of The Beatles songs on Russian state labels.

“But they were not acknowledged as being The Beatles and it was not them singing.”

The dissolution of the Soviet Union happened over three years from 1988, eventually ending after President Mikhail Gorbachev resigned.

He handed over power to President Boris Yeltsin, when the Soviet flag was lowered for the final time and in its place the Russian national flag raised.

To find out more about The Quarrymen visit here.