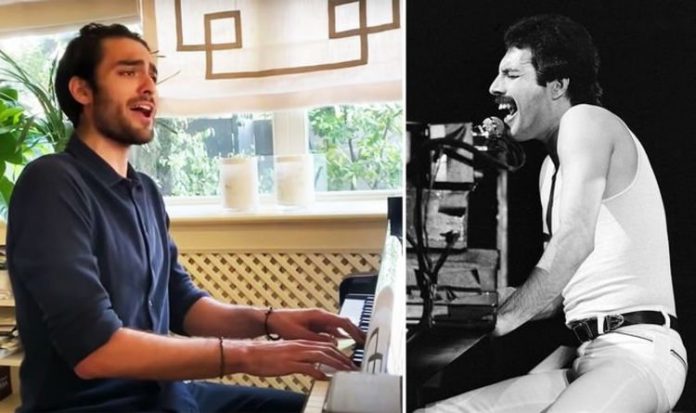 Andrea Bocelli is one of the most renowned tenors singing today, but did you know his son Matteo Bocelli is also a talented vocalist? The 23-year-old event duetted with his father on the latter’s recent studio album Si with the singles Fall On Me and Ven a Mi. The two men performed together back in 2018 for The Duke and Duchess of Sussex at the Royal Variety Performance.

While last year during the Italian lockdown, Matteo shared his cover version of Freddie Mercury’s iconic Queen song Love Of My Life.

The impressive young singer really is his father’s son as he played the piano and beautifully sang the late star’s emotional lyrics.

One commenter on the video said: “I’m a fan of Queen and this is a stunning version of this song.

“Bravo Matteo! Please try to create your own music to definitely ‘spread your wings and fly away’.”

On performing the 1975 track today, May explained: “I have my solo spot, which is a moment where I really climb off my pedestal and get close to the audience; which I love to do.

“It’s nice to be rock star zooming around on stage, but it’s lovely to do the opposite and go down and be very intimate. So I can do anything I want there; loads of my own songs I could play, but the one I always want to play is Freddie’s Love of My Life.

“The way we’ve arranged it recently…it’s very strange, it’s very emotional doing it I have to say. I’m sitting there on a stool and in the old days it would have been Freddie right beside me, while I play acoustics.”

The Queen guitarist said how he plays the track on an acoustic guitar while singing, before saying something spontaneous about Freddie.

During the concert performance, which is included in Queen and Adam Lambert’s new album Live Around The World, a virtual Freddie appears on a screen behind Brian to sing the last verse.

May added: “It’s just a beautiful moment, I love it so much.

“By that time the audience have lit up all their phones and we have a moment.

“The crowning glory is Freddie coming on and tying the whole thing up with a great sense of humour as he always did have, which I think is the icing on the cake. And then he’s gone and that’s it.”