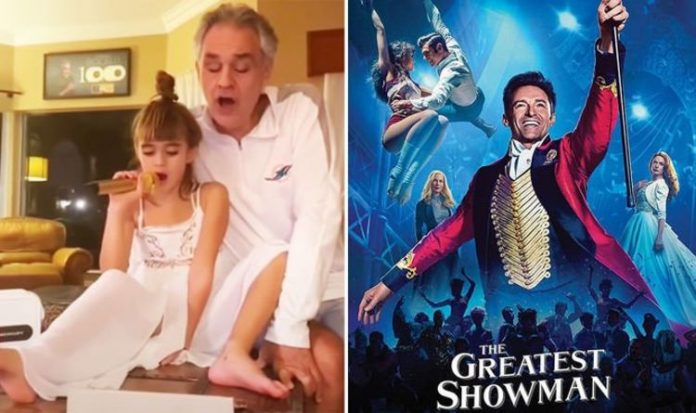 Last year, Andrea Bocelli’s eight-year-old daughter Virginia Bocelli made her professional singing debut. The father and daughter sang a beautiful duet of Leonard Cohen’s Hallelujah at the Believe in Christmas concert, promoting the Italian tenor’s new album. It turns out Virginia has been practising singing at home, trying out her father’s songs and The Greatest Showman hits on a karaoke machine.

One home video sees Virginia holding the microphone of her karaoke machine which singing with her father Andrea.

The eight-year-old is filmed performing 2018 single Fall On Me by Andrea and her brother Matteo Bocelli.

She’s also seen with her mother Veronica Berti trying out another of her father’s songs in Return To Love.

Andrea added: “In Parma, everything went smoothly and with the greatest of ease. It’s a father and daughter duo singing a song together.

“Virginia has mastered how to forget the cameras and stay focussed. She maintains the right spontaneity – on a song that I’d recently recorded that she has heard so many times. “

Asked if Virginia has singing lessons at home, he replied: “She didn’t take any singing lessons, no. Although, she grew up on a diet of bread and music.

“She has been studying the piano for three years and has been absorbing the art and sounds since she was born.”

Andrea added: “Indeed, from her mother’s womb, Virginia was able to experience daily studio sessions, plays at the theatre and the recording of Gounod’s Romeo et Juliette at the opera.”

Asked who Virginia’s favourite singers are, the star said his daughter’s an avid fan of both Michael Jackson and Ed Sheeran.

He shared: “She fell in love with the music of our friend Celine Dion and currently we are re-discovering Abba’s repertoire from Mamma Mia to Dancing Queen.

“Virginia is also a fan of Lang Lang the piano player, and listens to him for hours, with a particular fondness for Paganini-Liszt’s The Bell.”