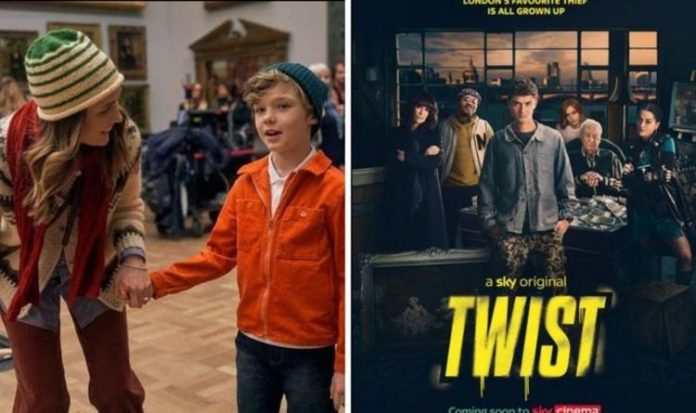 Twist has just arrived on Sky Cinema, and is one of the few new films to be launched this year. The Sky Original stars Sir Michael Caine, Rita Ora and newcomer Raff Law in a new version of Charles Dickens’ classic tale Oliver Twist. Sadly, the name is where the similarities with this film ends.

Movie fans are often willing and almost expecting to suspend their disbelief for a short time when watching a film.

Few people expect a Marvel movie to be like real life, with superheroes flying around with special powers.

In Twist, the film is asking its viewers, while not necessarily to believe in every detail, to at least accept the possibility of this rough and ready London scene.

However, from the moment the film begins there is preposterous scene after preposterous scene, sadly making it unable to speak into a modern context in the way its original material was able to with Victorian London.

In Twist, a young Oliver (played by Jude Law’s son and doppelganger Raff Law) has been forced to live alone after the death of his mother, as he has set up campsites all around London while painting every surface with his graffiti art.

His mother was an artist, and so his interest and love of art grew into a passion which he took with him to the streets.

Apparently being able to support himself alone for at least five years without ever stealing (preposterous point Number One) he is blown over by the operation run by Fagin (Sir Michael Caine) and his loyal band of followers, including Dodge (Rita Ora) and Batesy (Franz Drameh).

At first wishing to remain alone, he is lured by the pull of a ‘family’ and the potential of his first love with Red (Sophie Simnett).

While the original story sees the group performing low-level stealing, before Sikes involves them in bigger things, here, Fagin is trying to settle his own scores against a former associate, an art dealer who has a very valuable painting in his possession (David Walliams).

Sikes (Leana Headey) wants in on the deal, and is just as frightening and menacing as the man from the book, while also having a tight hold over Red.

This film certainly bows down lower to the likes of Guy Ritchie than to Dickens, becoming a slick heist film rather than a social commentary.

While that may not be an issue usually, Twist’s clunky script and sometimes clunky acting does not make it as suave and smart as it may have been intending.

At the heart of the story is Oliver and Nancy, but their relationship is straight-forwardly romantic in this, which is helped by Raff’s charisma on screen, much like his father’s.

However, the motherly figure is gone from the drama, and the choice to make Dodge and Batesy the comic relief leaves much comedy to be desired.

In their version of events, crime does indeed pay, with all of Fagin’s gang lasting to the end, and Oliver even becoming friendly with the local police.

The moral of the story is skewed, and ultimately the film does not pack anywhere near as much punch as this story should.