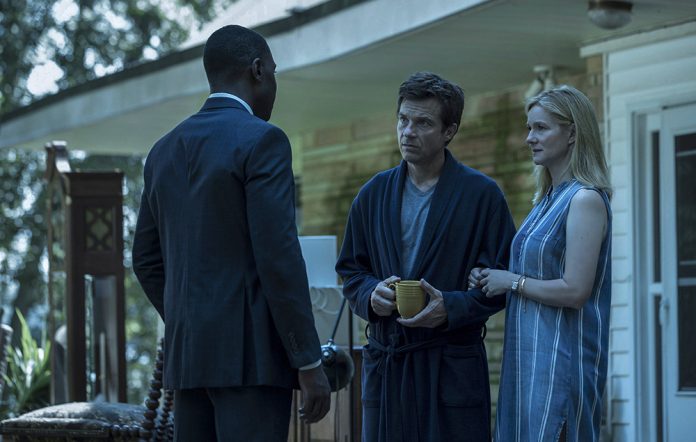 The first series debuted in July 2017

Is there a trailer for season 2?

What should we expect?

Jason Bateman has said: “Now that Del is gone, the assumption is that another lieutenant would come into town to oversee this larger portion of money that I’m charged to wash… The riverboat casino would be able to handle that and then some. And probably that means that Marty’s obstacles are going to take the shape of unions and perhaps some St. Louis or Kansas City mob, which is actually pretty formidable.

“Politicians and bureaucrats and land management and zoning rights and all those kinds of things that take a lot of bribery, coercion. It’ll probably become a little — not white collar, but probably less moonshine and a little more… I don’t know if ‘Chardonnay’ would be the right term, but the criminals might be wearing ties next year as opposed to flannels.”

In a more recent interview, he revealed: “It’s a good escalation of everything as far as danger, the business challenges and — domestically — our relationship. Where we leave things, we have $50 million to deal with instead of $8 million. We’ve got a relationship with the Snells that we need to deliver on and a three-way marriage with the heroin coming in from the Mexican cartel, the possibility of a casino helping out with the laundering. One of the things that I’m really interested in is that the kids are aware of what Mom and Dad are doing. It sort of disintegrates that idyllic parental model that a kid deserves to have, that inherent position of deference. And now we have more of a peer relationship with our kids and that’s going to be a challenge.”

Netflix has confirmed that Ozark will hit the streaming service on August 31. Watch the announcement video below.

How many episodes are there going to be?

Have any photos been released?

Yes, four first-look images have been released. See those below.

How many episodes will Batemen direct?

Bateman revealed in a recent interview with Collider that, due to family commitments, he will only be directing the first two episodes in the second series. Asked how many episodes he will be “helming”, Bateman responded: “Just the first two, I wasn’t able to get home as much as I wanted to last year.” He added that with the new arrangement he can visit his wife and kids “every other weekend”.

Just one so far: Janet McTeer. The British actor will play “a Chicago based attorney with links to the cartel”, says a Netflix press release. Apparently “in a deal with the devil” she becomes a “potential threat” to the Byrdes. McTeer will also be seen in the forthcoming season 2 of Netflix’s Jessica Jones.

Yes, filming began in the autumn of 2017 in Atlanta, Georgia and is still going as of January 2018. Julia Garner (Ruth Langmore) has shared the below photo of the woodland set:

Is Marty in trouble with the FBI?

The Metro recently published photographs of Jason Bateman filming for the new series. In the new images, he is shown as being escorted from the local FBI headquarters by new FBI agent, Helen, played by Janet McTeer. Could he be in trouble?

What else is going to happen in season 2?

Jason Bateman says Marty and his wife Wendy (played by Laura Linney) are going to start getting their relationship back in order. “They have found a place of unification by the end of the first season, in so far as their ability to try to manage the criminal aspect of their partnership. As far as them getting things back on track romantically and domestically, I think that that will continue to grow but probably at a slower rate. Maybe there are new avenues of attraction as they build that business part of their relationship. Maybe it’ll grow through a side door there. It’s probably going to get a little worse before it gets better.”

Batemen also let slip that Wendy’s imprisoned father will be back in season 2. “Her dad comes back, I think that’s public”.

And hints have been that we’ll see a major character killed off in the new series. Bring it on.

How many seasons are there likely to be?

Speaking to Digital Spy, actor Michael Mosley (Mason Young) suggested the show may only run for a few more seasons, saying: “I know Jason wants to maintain the integrity of the show and the storyline of the show. I don’t think you have that problem [in the UK], but in America it’s like there has to be seven seasons and a movie and everything and that’s the goal, but I don’t think he feels tied to that. I think they’ll come up with a story if there is a story but if there’s not, they won’t.”