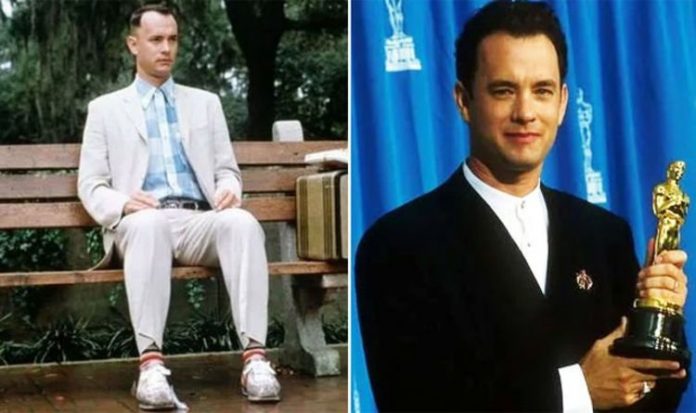 Back in 1993, Back to the Future trilogy director Robert Zemeckis decided to adapt Winston Groom’s novel Forrest Gump into a movie starring Tom Hanks. The Oscar-winning box office smash is set over several decades of the 20th century, following the fictional life of a dim but kind Alabama man who ends up having a profound influence on historical events. It turns out that during the shoot, Hanks had serious doubts about the movie that not only won Best Picture but also the Best Actor Oscar for him.

In an interview marking the 25th anniversary of Forrest Gump, Hanks admitted: “It was an absolute crapshoot.

“It’s a really crazy, unique motion picture without a doubt.

“And it’s a movie in which the great moments that resonate are going to change depending on when you’re watching it.”

During the famous bus stop scenes with many pages of dialogue, while sat on a bench, Hanks remembered asking Zemeckis if anybody would care about this movie.

Speaking with In Depth With Graham Bensinger, Hanks shared that one of the scenes he helped fund was Forrest’s run across the USA.

Paramount felt it was too expensive to shoot even though Zemeckis argued it was a crucial scene. So the director went to Hanks for the money, asking the actor to trust him on this.

The actor remembered that Zemeckis said: “Well, this run is going to cost X amount of dollars.”

Hanks said it wasn’t cheap but agreed to fund the Forrest Gump running scene out of his own pocket.

Zemeckis said: “You and I are going to split that amount, and we’re going to give it back [to Paramount].

“We’ll give you the money back, but you guys [Paramount] are going to have to share the profits a little bit more.”

Hanks remembered: “The studio said, ‘Fabulous, great. OK.’ And it was good for us, too.”

In fact, there was even a scene where Hanks had to pay for the weather insurance to allow the filming to take place.