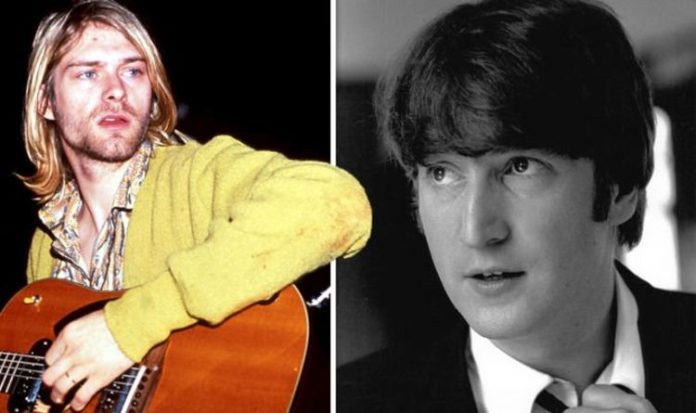 Nirvana took hold of the 1990s with their iconic grunge-style music, and with the release of their incredible albums Nevermind and In Utero. Singer and songwriter for the band, Cobain, was a massive fan of The Beatles, and was brutal about how he felt about each of the members’ songwriting styles.

Speaking in an interview in 1993, Cobain confessed: “John Lennon was definitely my favourite Beatle, hands down.

“I don’t know who wrote what parts of what Beatles songs, but Paul McCartney embarrasses me.”

The 26-year-old at the time added: “Lennon was obviously disturbed [laughs]. So I could relate to that.”

He also explained how he learned a lot about The Beatles’ lives from reading about their lives growing up.

Cobain said: “I’m so sceptical of anything I read, especially in rock books. So I just felt really sorry for [Lennon]. To be locked up in that apartment.

“Although he was totally in love with Yoko and his child, his life was a prison. He was imprisoned. It’s not fair.”

Bringing the conversation back to how he felt at the time, Cobain went on: “That’s the crux of the problem that I’ve had with becoming a celebrity – the way people deal with celebrities. It needs to be changed; it really does.”

The singer continued: “No matter how hard you try, it only comes out like you’re b******g about it.”

Speaking about the song In My Life, Grohl told Radio 2: “It means a lot to me because it was the song that was played at Kurt Cobain’s memorial.

“That day, after everyone had said their piece, this next song came over the speakers and everyone got to celebrate Kurt’s love of The Beatles one last time together.

“Still to this day, when I hear it, it touches a place in me that no other song ever will. It’s called In My Life, and knowing how much of a fan Kurt was of The Beatles, and how much of an influence they were, to everything we’ve ever done… I’d like to play this one for him.”

Grohl and the remaining members of Nirvana played with Sir Paul McCartney in 2013 in Seattle, more than 15 years after Cobain’s death.

Speaking about playing with Grohl and the rest of the band, McCartney told Rolling Stone: “Dave was going to come up to Seattle with his family, and I said to him: ‘Do you think there’s any chance the guys would fancy [a reunion]?’

McCartney explained the group “barely had to rehearse” for the show, saying: “When you’re playing with guys like that, you realise that they’ve been to the heights of fame, so they’re used to it – they’re not gonna freak.

“And they’re hell of musicians, so we learned everything really quickly. That’s what’s great about playing with guys like that.”