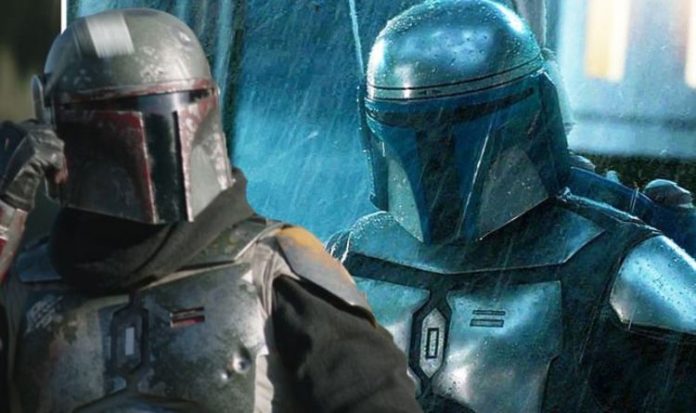 Star Wars is continuing to expand upon its ongoing universe with the Disney Plus show The Mandalorian. This week’s episode saw Mando (played by Pedro Pascal) taking Baby Yoda (or “Grogu”) to the planet of Tython to bring him into contact with other members of the Jedi order. Mando unfortunately found himself hitting a few snags along the way – namely the arrival of Boba Fett (Temuera Morrison).

Boba tracked down Mando in order to retrieve his legendary Mandalorian armour, which he acquired in Tattooine earlier in the season.

When Boba eventually confronted Mando, he explained how the armour belonged to him, and to his father before that.

After a brutal battle against the Empire and a seemingly endless supply of stormtroopers, Mando and Boba made their peace with one another.

With Boba now reunited with his iconic green and red armour, he then detailed where it originally came from.

Thankfully for the film series’ heroes, Boba Fett didn’t seem to carry this hatred for the ancient religion.

Boba continued bounty hunting, and later became known as one of the best in the galaxy, before Luke Skywalker (Mark Hamill) and his friends launched him into the Sarlacc pit in Return of the Jedi.

Considering the last moments of The Mandalorian’s latest episode saw Boba agreeing to help Mando with reclaiming Grogu – a Jedi – his hatred for the religion may have subsided at this point.

However, as Boba is a ruthless killer, who “gives his allegiance to no one”, fans may see him turn on Mando at any point in the future.

She told Mando that another Jedi needed to reach out to Grogu and help train him.

It has since been rumoured that Luke Skywalker, or Ezra Bridger could be the next in line to take on Grogu, and train him in the ways of the Force.

The Star Wars franchise, and The Mandalorian, are both available on Disney Plus now.