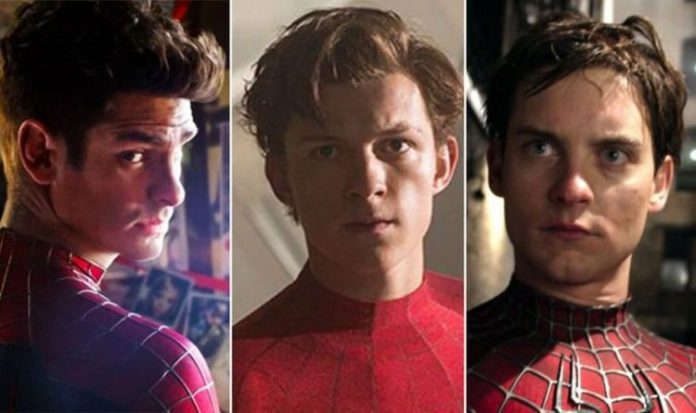 Tom Holland has been busy shooting Untitled Spider-Man 3 ahead of its release this Christmas. There’s been all kinds of rumours surrounding what MCU boss Kevin Feige codenames Homecoming 3, including the appearance of Sony Spider-Man stars Tobey Maguire and Andrew Garfield in some multiverse mayhem with old villains. In a new interview, 24-year-old Holland, who has accidentally leaked Marvel spoilers in the past, has played it very coy.

Speaking with the Variety Awards Circuit podcast, Holland was asked about the last time he saw Garfield and Maguire.

The Spider-Man star replied: “I’ve only met Andrew once, I met him at the BAFTAs and he was lovely.

“Really nice bloke and we had a good chat. It was quite soon after Spider-Man Homecoming had come out and he was really positive and nice.”

While the 24-year-old shared he’s only bumped into Tobey a few times at different LA parties, saying how nice he was too.

Holland continued: “You sit down, read the script, and see what they’re trying to do, and they’re succeeding.

“It’s really impressive. I’ve never seen a standalone superhero movie quite like it.

“And I’m just, you know, again, that lucky little s*** who happens to be Spider-Man in it.”

The Spider-Man star also gave an update on how shooting for Untitled Spider-Man 3 is going.

Holland shared: “We got a lot more shooting to do. We started before Christmas and shot for like seven weeks.

“We stopped for the Christmas break, and then we’re starting again. I’m just as excited as everyone else to see it, let alone be a part of it.”

Certainly, the fact that Homecoming 3’s title hasn’t been announced yet suggests it’s something of a spoiler for where we are in the MCU.

Fans are halfway through WandaVision, which is expected to open up the MCU multiverse. And if Spider-Man 3 has anything to do with it (which it is heavily rumoured to) then the title could be something like Homeworlds as some leaks have alleged.

It’s also rumoured that WandaVision, Untitled Spider-Man 3 and Doctor Strange in the Multiverse of Madness are something of a multiverse trilogy.

After all, Doctor Strange is in the latter two movies and will be mentoring Peter Parker in Homecoming 3.

While with Scarlet Witch co-starring in Doctor Strange 2, we’d expect the Sorcerer Supreme to at least cameo at some point in WandaVision.