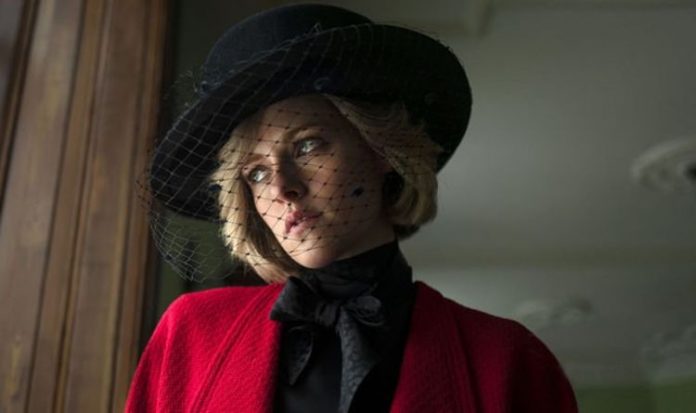 Princess Diana is receiving another film about her life in the Royal Family this year – but this time with a difference. In the upcoming film Spencer, 30-year-old Kristen Stewart is playing the iconic Royal, and will tell the story of one heated weekend at the Sandringham Estate, where the marriage between Lady Diana and Prince Charles allegedly fell apart.

SEE THE FIRST LOOK AT KRISTEN STEWART AS LADY DIANA BELOW

The film is set in December, 1991, and will show Stewart playing the demure yet powerful Princess in a string of tough scenes.

The first image of Stewart as Lady Diana shows her in the iconic outfit red and black outfit worn by the Princess in 1991.

Covering a red blouse with a red coat, Lady Diana can be seen wearing a black top hat with a black veil over her face.

It was also confirmed today that Stewart will be joined on-screen in Spencer by a collection of enormous stars, including Sally Hawkins, and Sean Harris.

The actor taking on the role of Prince Charles has not been announced just yet.

Spencer has also been confirmed to be filming now in Germany.

The movie is being directed by Pablo Lerrain, who previously directed such pictures as Locke, Jackie, and Neruda.

On casting Stewart as the Princess, Pablo recently said: “Kristen is one of the great actors around today. To do this well, you need something very important in film, which is mystery.”

Pablo continued: “Kristen can be many things, and she can be very mysterious and very fragile an ultimately very strong as well, which is what we need.

“The combination of those elements made me think of her. The way she responded to the script and how she is approaching the character, it’s very beautiful to see.

“I think she’s going to do something stunning and intriguing at the same time. She is this force of nature.”

Stewart herself revealed she was “intimidated” by the role when asked about it last year.

Stewart said: “The accent is intimidating as all hell because people know that voice, and it’s so, so distinct and particular. I’m working on it now and already have my dialect coach.”

In an interview with InStyle, the 30-year-old actor also confessed: “I haven’t been this excited about playing a part, by the way, in so long.”

The former Twilight star added: “It’s one of the saddest stories to exist ever, and I don’t want to just play Diana – I want to know her implicitly.”

Stewart joins the likes of Naomi Watts and Emma Corrin who have also played the Princess in TV and movie adaptations over the years.

Spencer’s production company, Neon, is reportedly looking at an autumn 2021 release for the movie.

The film’s official synopsis reads: “December, 1991: The Prince and Princess of Wales’ marriage has long since grown cold. Though rumours of affairs and a divorce abound, peace is ordained for the Christmas festivities at Sandringham Estate. There’s eating and drinking, shooting and hunting. Diana knows the game. This year, things will be a whole lot different.”

Spencer does not yet have a release date.