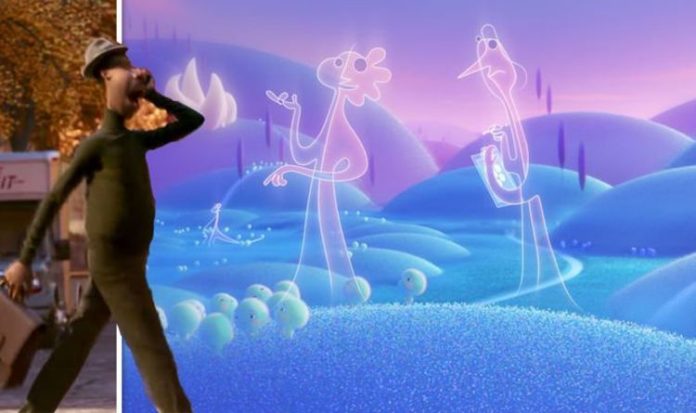 Soul came out on Disney Plus on Christmas Day, meaning it is finally available for fans to watch in people’s homes. It is the ideal family film for the festive season, as it is enjoyable for parents and children to enjoy together. The ending talked about the meaning of life, in one way or another, but what did it all mean?

What did the ending of Soul mean?

Soul was full of joy for many reasons, as it taught Joe Gardner (voiced by Jamie Foxx) more about what life truly means.

He had tried to run away from death after he fell down a manhole, and his soul was sent to The Great Beyond.

READ MORE:  Soul review: Pixar animation shows what it means to be human

He escaped the train to The Great Beyond and instead ended up in The Great Before, where he was matched up with another soul, Number 22 (Tina Fey) to help them understand the ‘spark’ of life.

All Joe wanted to do was get back to reality, so he and Number 22 used some slightly naughty methods to get to Earth.

They arrived, but 22 took on Joe’s body while Joe became a sage helper in the form of a cat, desperately trying to get back to his body.

Number 22, after spending centuries scared of living life for real, learned to appreciate the little things like the hustle and bustle of the subway and the falling leaves in the autumn.

Meanwhile, Joe was desperate to make his dream of playing jazz piano with Dorothea Williams a reality and failed to notice the joyous moments which made his life special and unique.

While they eventually were able to get Joe’s body in the right place, Number 22 ended up back in The Great Before, becoming a lost soul who had experienced the spark of life without being able to fulfil her dreams.

Joe had stolen her chance at life so he could fulfil what he wanted and soon came to realise how he had been taking life for granted, focusing solely on jazz without taking stock of the good things in his life.

He finally learned to be present, so had to search for Number 22 and bring her back, returning to her the Earth badge he had taken.

By doing this, Joe was sacrificing his life for 22, giving her a chance to enjoy pizza and haircuts and all the things he had spent his years ignoring.

He jumped down to Earth with her, knowing he would have to return to The Great Beyond and let his body die on Earth.

However, as he is once again on the travelator towards The Great Beyond with The Accountant making sure he makes it there rather than escaping like before, Jerry, one of the celestial beings, gave him the chance to try one more time.

The Jerry beings distracted the Accountant so he would not notice Joe was missing from his count, and Joe’s soul returned to his body and was far more present in his life than before.

This ending shows how, when we only focus on the future, we forget to be present, which is all part of what it means to be truly human.

Soul is streaming on Disney Plus now