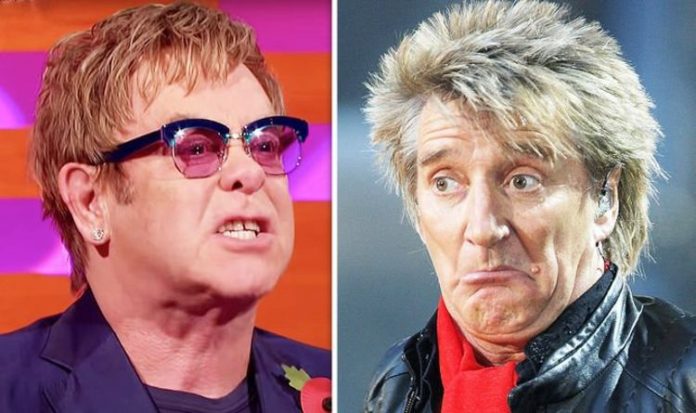 The Maggie May crooner and Sir Elton’s banterous exchanges have been well-documented throughout the years. The music legends famously refer to each other by female nicknames Sharon and Phyllis. Sir Elton also once “shot down” a hot air balloon promoting an upcoming Sir Rod show, as their friendly feud continued. And in another quip at Sir Rod’s expense, Sir Elton branded him as “a***hole” for making Christmas albums.

The duo have playfully referred to one another as “frenemies” during their lengthy public feuds, and recently were said to have fallen out again in Sir Elton’s book.

He claimed the star had a “f***ing cheek” to brand him “money-grabbing” over his Farewell Yellow Brick Road tour and to lecture him on the “spirit of rock and roll”.

Sir Elton blasted his rival for spending “most of the last decade crooning his way through the Great American Songbook and Have Yourself a Merry Little Christmas”.

Sir Elton’s rant about Sir Rod’s alleged hypocrisy was revealed in his autobiography Me, which was released in paperback last week.

In an earlier swipe at the First Cut is the Deepest singer, Sir Elton blasted the star for choosing to release songs to make money.

Ahead of the slam, Sir Elton had reflected on his career and admitted that he “didn’t really see the point of making a record” if he didn’t “try and make it better”.

Sir Elton said: “I’ve been making records since 1969, I’ve made a lot of records and this one  [The Diving Board] is one of my favourites because I think we’ve come a step further.

“I don’t mean that they are a very good record company but you know, it’s been suggested.”

Bishop interjected to explain that you could only be considered “a proper star” when you “start calling your record company an a***hole”.

Sir Elton then took a cheeky swipe at Sir Rod for his decisions to release specific genres of music.

He said: “They wanted me to make Christmas albums and you know cover albums, Motown records but that is so silly.

“I’ll leave that to Rod Stewart and people like that… Did I say that?”

The audience laughed hysterically, as Norton told him: “Yes, you did!”

But in a brief moment of kindness to Sir Rod, he added: “Having said that his album is doing much better than mine… a***holes.”

Elton John’s autobiography Me was published by Macmillan and is available here.