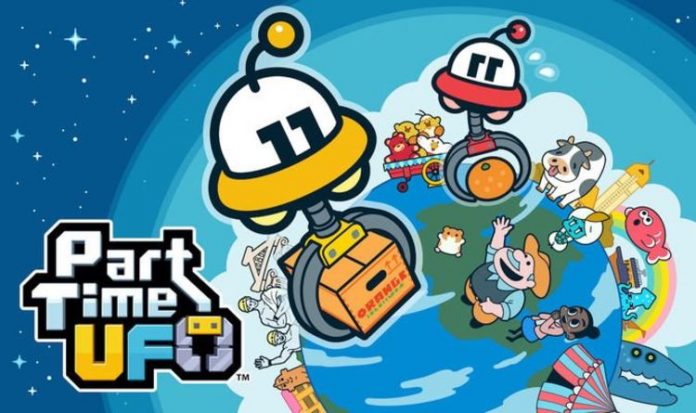 Part Time UFO may have made its debut as a mobile game back in 2017, but don’t let that put you off.

Developed by Kirby studio HAL Laboratory, it’s the sort of game I expect to see on future hidden gem videos from the likes of Metal Jesus Rocks.

But before I get too far ahead of myself, Part Time UFO is a physics-based puzzle game featuring a flying claw machine with a desire to work.

After helping a farmer load giant oranges onto his truck, you’ll spend the remainder of the game performing all kinds of weird and wacky jobs.

This includes helping a group of cheerleaders form a pyramid, restoring sculptures in a museum, and filling up a boat with giant fish plucked directly from the sea.

Needless to say, jobs get harder and even more bizarre as the game goes on, like when you return to the high school in order to stack sumo wrestlers, or are sent to the circus to help an elephant perform balancing tricks on a unicycle!

It’s an easy game to pick up and play, but it’s not long before the challenge starts to ramp up, with players forced to very slowly, methodically and carefully place items while the clock counts down to zero.

Some of the later levels actually border on the frustrating, although it’s hard to get too annoyed when a game is this darn cute – like when a puppy eats your favourite socks.

If the colourful visuals and absurd stages aren’t enough to charm you, then the whistle-tastic, hum-tacular theme song won’t fail to leave you smiling. Either that or drive you insane.

Part Time UFO also gives you plenty of reasons to keep coming back. There are dozens of adorable outfits to unlock, many of which containing special perks that come in handy during the trickier stages.

You can unlock more challenging variants of existing levels by earning medals, although figuring out the requirements is a challenge in itself – and something I quite enjoyed.

The game is well worth playing as is, but the addition of new modes and co-op multiplayer support makes Part Time UFO utterly essential.

My favourite of the new game modes is the addictive Tower of Infinity, where the aim is to build as high as humanly possible.

It’s up there with Overcooked in terms of couch co-op, as you bicker and argue with your teammate about where to best place random building blocks that come in all shapes and sizes.

My only complaint with Tower of Infinity, and the game in general for that matter, is that it could do with a bit more variety. Maybe some extra settings or win conditions, or even just a few additional backdrops.

The other new game mode is Treasure Island, which has the makings of an actual campaign, were it not for its short running length.

There’s definitely more complexity here, with traps to avoid, switches to discover and even a boss battle to conquer, I just wish it was a bit longer.

However, the amount of replayabilty coupled with the budget price tag means that Part Time UFO will be a full-time fixture when you download it for Nintendo Switch.