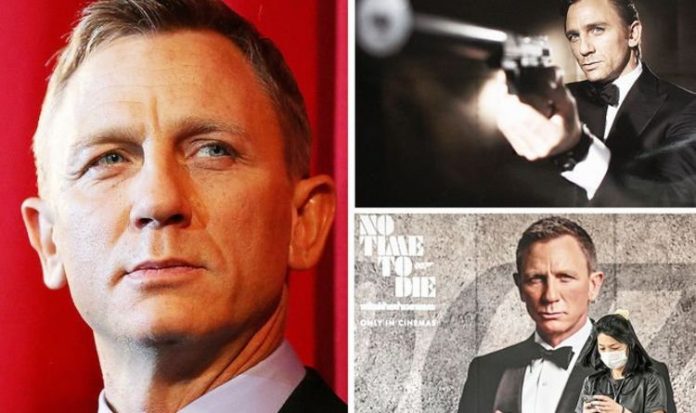 The British actor’s final appearance as James Bond will finally be shown in theatres this October after the film was delayed for a third time due to the coronavirus pandemic. Craig, 52, portrayed secret agent 007 for the first time 15 years ago in Casino Royale and has regularly voiced his frustration with the iconic role. After No Time To Die’s release, Craig’s successor will be announced to front the 59-year-old franchise.

Since Craig revealed No Time To Die would be his final Bond film, many have speculated about who will take over.

Peaky Blinders star Tom Hardy leads the race according to Ladbrokes, who gave him odds of 2/1, and a film blogger claimed the actor was due to take the reins too.

In September, The Vulcan Reporter revealed his belief came from insider information but the author did not disclose any of their sources.

They wrote: “I expect the people who follow my scoops and know my credibility to help me with making this article stand out in comparison to the [other] articles.”

In the past, Hardy rejected claims that he had been cast as the MI6 agent, including in 2018 when he made a joke on Instagram.

Daniel Craig admitted that there was ‘no room’ in his life for James Bond amid new 007 speculation (Image: GETTY)

Ladbrokes and a prominent blogger believe Tom Hardy will be the next James Bond after No Time To Die (Image: GETTY)

He wrote: “Dammit I was in my tux and on the runway good to go. No drama. Return to base. Headed back to Nola stood down 19.”

Grantchester star James Norton was listed as the second favourite by Ladbrokes in a December article, followed by Idris Elba, Sam Heughan and Rege-Jean Page.

Many of the actors included in the list of possible future Bond’s have tried to distance themselves from the casting.

In 2014, Heughan, who stars in the US drama Outlander, told Australia’s The Daily Telegraph: “Of course any actor would want it.

“But I also have a theory that any reasonably well-known British actor who has worn a suit instantly has their name thrown into the ring by fans.”

Next year will mark the 60th anniversary of Bond and franchise head Barbara Broccoli revealed her hopes for the next 007 actor.

In October, she told Total Film: “It will have to be reimagined in the way each actor has reimagined the role.

“That’s what is so exciting and fun about this franchise – the character evolves. Eventually, when we have to think about it, we’ll find the right person.”

In the meantime, Craig’s run as Bond edges closer to an end after five films – Casino Royale, Quantum of Solace, Skyfall, Spectre and No Time To Die.

The actor is believed to have felt torn about his time as the martini “shaken, not stirred” sipping spy.

In 2014, when Craig was asked if he would star in another James Bond film he said: “Now? I’d rather break this glass and slash my wrists.

After the release of Spectre in 2015, he hinted that he was ready to leave the franchise when he said: “I have a life and I’ve got to get on with it a bit. But we’ll see.”

Ahead of his casting in No Time To Die, Craig disclosed the one thing that would make him stay for a fifth film: “If I did another Bond movie, it would only be for the money.”

Despite the apparent dissatisfaction with the 007 role, Craig rejected claims he was unhappy during a 2015 interview with the French publication Le Figaro.

When the interviewer suggested that filming Spectre had been “very different” and “like suffering”, Craig snapped: “I don’t know why you say that. Why do you say that?”

The Le Figaro reporter clarified that she believed that was the case because of his “interviews” he had given previously.

Craig vented: “No, look, I bulls*** in interviews all of the time.”

However, he did admit to the gruelling two-year schedule behind creating Bond films had taken its toll on him.

No Time To Die was due to be released in April 2020 – after three delays it will air on October 8 (Image: GETTY)

Craig said: “It takes a long time, you get together, you sit down with the writers and the director and everybody else is creatively involved.

“You’re working on it for a good year before you begin to think about filming and then this is an eight-month shoot, it’s three times as long as any movie.”

He claimed to have had “more fun” on Spectre than “all the others” and told the reporter that she “should not believe” what she “read on the internet” about his dissatisfaction.

Craig believed that there were no similarities between himself and Bond and that he hadn’t taken anything from the role.

He said: “It’s a character I play, I literally just turn it on… I have some nice suits, I stole his suits.

Daniel Craig previously denied that he would star in a fifth James Bond film – No Time To Die (Image: GETTY)

“Nothing at all, really genuinely no. I do this and then I go home and I forget about it, there’s no room for James Bond in my household.

“I have a wonderful home life and he doesn’t have that.

“He, as you notice in the film, has a rather solitary flat with no pictures on the walls, one sofa and a television. I, thankfully, have a very warm home to go to.”

While Craig claimed that he didn’t “give a f***” who replaced him as Bond, he gave some tips to the future actor.

Billie Eilish will perform No Time To Die’s iconic track – here are the other James Bond songs (Image: EXPRESS)

He told TimeOut London: “You have to make the choice at the end of the day… it’s your bed to lie in.

Daniel Craig will play James Bond for a final time in No Time To Die, which is scheduled to be released on October 8.