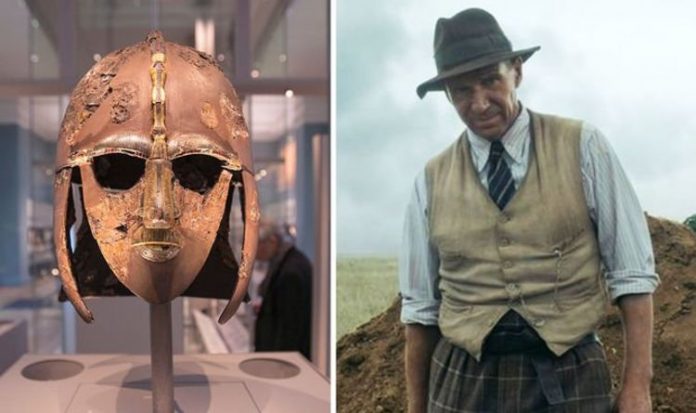 The Dig tells the extraordinary story of the breakthrough made at Sutton Hoo in Woodbridge, Suffolk, just before the outbreak of World War 2. Archaeologist Basil Brown uncovered two early Medieval cemeteries on the property of Edith Pretty that dated from the sixth to the seventh centuries. Inside one was an undisturbed ship burial with a wealth of treasure, including a ceremonial helmet now held at the British Museum.

And, ahead of the film’s release, curator of Early Medieval Europe Collections at the museum, Dr Sue Brunning, spoke to Express.co.uk about the secrets uncovered.

She said: “The most famous artefact is the helmet and that is the piece that is seen on the front of textbooks.

“It is basically an extraordinary iron helmet that has a very iconic face on the front of it with a moustache and black eyes.

“But there is also loads of gold and garnet work, they used a very intricate technique that involves the inlaying of small red gemstones.

Archaeologist Basil Brown made a stunning find in 1939 (Image: GETTY/NETFLIX)

“They are inlaid into these grid-like gold frames to create the glittering metalwork.”

And Dr Brunning detailed how, thanks to the generosity of Mrs Pretty, they are now all kept at the museum.

She said: “In terms of the amount of artefacts, they are all held at the British Museum.

“Mrs Pretty made the decision in 1939 to donate them to the nation and that meant they came to us.

“There was an inquest held to determine who owned the assemblage as part of the treasure trove laws. They were found to belong to her and so she donated them.

“All of the main parts of the assemblage are on display.”

Dr Brunning explained how some parts of treasure are kept from being displayed, while others are often loaned out.

She added: “There are some pieces that are in storage because they are too fragile or too fragmented.

“Have they been anywhere else? Yes, in ordinary times we regularly loan them back to the National Trust site at Sutton Hoo.

“They often have a rolling series of exhibitions and we regularly loan pieces for that.

The burial was packed with treasure (Image: BRITISH MUSEUM)

“The helmet was discovered in hundreds of pieces. It was completely shattered.

“In the middle of the burial ship was a chamber with a roof, and at some point that had collapsed, shattering the helmet.”

Experts had to complete a 500-piece “jigsaw puzzle” to reconstruct the helmet.

Dr Brunning explained: “The conservator at the time did the best that he could and came up with his interpretation of the helmet.

“Later on it was realised that it did not look right. There were parts of the helmet that didn’t function.

Photo of the excavations in 1939 (Image: BRITISH MUSEUM)

“They went back to the drawing board and a new conservator came in the Sixties to re-do the helmet.

“He found a crucial piece that seemed to be missing and was able to resolve the problems they had beforehand.”

The new Netflix release is directed by Simon Stone and based on the 2007 novel of the same name by John Preston.

It is available to stream on Netflix now.

The cast is led by Carey Mulligan, an Oscar nominee who plays Mrs Pretty.

Ralph Fiennes takes on the role of Mr Brown – a self-taught archaeologist who has to fight to continue work on excavating the ship he found.

In a previous interview with Express.co.uk, Dr Brunning said she believes Mr Fiennes is perfect for the role.

She stated: “Basil Brown inspired me at university to study this particular period, he’s an important person in my mind and it was really nice to see Ralph Fiennes’ interpretation.

“He got pretty close to what Basil Brown was like in my mind – based on what I’ve seen in his writings, his voice, and his attitude

“He really brought that to life. There is one particular moment where he goes and smokes his pipe during a break by the river.

“He sees a boat sailing past and there’s this moment where you can see that he is imagining the ship he has found would have sailed in that same water.

“It really nailed what Basil Brown would have been like. I think they did a lovely job.”