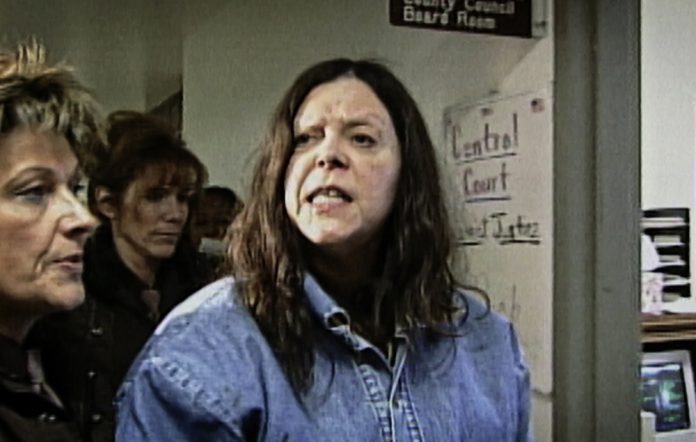 Marjorie Diehl-Armstrong was sentenced to prison in 2007 for her part in the 2003 bank robbery in Erie, Pennsylvania that killed Brian Wells. The 46-year-old was a pizza delivery man who became involved in a plot to take $250,000 from a PNC Bank and was sent into the financial institution wearing a collar bomb, carrying a gun fashioned to look like a walking cane, and holding a series of manic notes to hand to bank staff. He was later arrested and the bomb detonated, killing him.

The heist is now the subject of Netflix‘s latest true crime documentary, Evil Genius: The True Story Behind America’s Most Diabolical Bank Heist. It’s a complex tale that takes constant twists and turns, and it’s never quite clear who is telling the truth and who isn’t. It’s completely fascinating – each new discovery more bizarre than the last – but it also highlights the inherent misogyny that runs deep in society.

Diehl-Armstrong is described in the series as a hoarder and a master manipulator. When her house is investigated, the bodies of two cats are found, there are stacks of clutter mixed in with faeces everywhere, and a shot is shown of a sticker on the window declaring it unfit for human habitation. All of this is connected repeatedly to her bipolar diagnosis, which we’re reminded of on several occasions. She is constantly painted as mentally ill – a strange madwoman with a knack for getting into men’s heads and making them do her own bidding.

But Diehl-Armstrong wasn’t solely responsible for Well’s death. Depending on who you believe, she was joined by up to four male co-conspirators, some of whom shared similar characteristics to her. Bill Rothstein and Ken Barnes were both hoarders too – when investigators visited Barnes’ home they said they couldn’t tell if they were stepping on more junk or the floor, and they found two dogs in such poor condition they had to be put down. Rothstein is also described multiple times as a “master manipulator”, yet neither of these factors ever seem to be treated with the same gravity as they are with Diehl-Armstrong. They are allowed, in a way, to be these things without much scrutiny or judgment. The fact that Rothstein and Diehl-Armstrong used to date and now he is helping her plot bank robberies and get rid of murder victims is largely glossed over, where if it was the other way round far more time would have been spent exploring her unwavering devotion to him. In both scenarios, she is the flawed one – a manipulator using her femininity to her advantage or a spurned woman desperate for love – while he gets off lightly.

Similarly, the men of the story are allowed to inhabit their bodies in whatever way they choose, where Diehl-Armstrong’s appearance is cited as a constant flaw. She looked “scary”, her big eyes are singled out as an ominous feature, and much is made of how she was once beautiful. None of the men involved are exactly Greek gods and their mugshots are just as creepy as hers, if not more so. But their unsettling stares are not picked up on, because society doesn’t judge men’s appearances as harshly as it does women’s. They have a free pass to be as attractive or unsightly as they wish, while Diehl-Armstrong’s looks become part of her narrative.

It’s not just in the way the now-deceased criminal is presented in the documentary that this sexism is apparent. It’s present in the investigation too. There’s a scene early on where Diehl-Armstrong is cuffed and waiting to be taken into custody where she names Rothstein as being responsible for Wells’ death. No one questions what she means by this, the implication being this mad, eccentric lady is lying again (to the filmmakers’ credit, they do point this out in the show).

There is always the overhanging question of how truthful she’s being throughout the programme. In part that’s because, yes, she is a proven liar, but compare it with how comments by the likes of Rothstein are taken and there’s a glaring disparity. For example, when he shows police around his house after tipping them off about the murder of James Roden, he tells them the guilt he feels for helping Diehl-Armstrong dispose of the body has made him want to kill himself and shows them a suicide note. It opens: “This is not related to the Wells case.” Officers immediately find that suspicious, but when Rothstein explains he merely was trying to save them from wasting time trying to find links between the two cases, they lap it up. Wariness is reserved mostly for her. He is taken at face value to the point where it is years later and Rothstein is dead before authorities make him a chief suspect.

There is no suggestion that Evil Genius or investigators purposefully treated Diehl-Armstrong the way they did because of her gender, but that’s what makes the series all the more reflective of society as a whole. It illuminates attitudes that are so deep-rooted in our world that we don’t even clock our behaviour as misogynistic. As well as giving us insight into a truly bizarre case, Evil Genius can also teach us all a very important lesson.