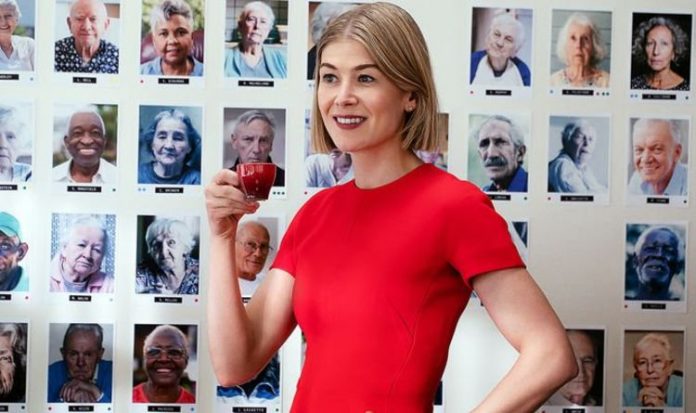 If this was a heartwarming drama, this line would signal the “journey” that our poor, wounded heroine was about to embark upon. I Care A Lot is a much more mean-spirited affair. Instead of watching Marla learn to reconnect with humanity, we end up agreeing with every word. As the founder and CEO of Grayson Guardianships, Marla seeks out elderly people with no family and fat bank accounts.

After bribing a doctor to diagnose them with dementia, she then petitions a judge to make her their “ward” so she can take over their financial affairs, lock them in a care home and bleed them dry.

Then she and her girlfriend and partner Fran (Eiza González) scam the wrong person.

According to the corrupt doctor, Jennifer Peterson (Dianne Wiest) has a very minor memory problem and no family to look out for her.

But crime lords such as Roman Lunyov (Peter Dinklage) don’t appear on official records. So this time, the cold-blooded con artist will have to do battle with a hot-blooded killer with a vested interest in Jennifer’s wealth.

Pike (who has been nominated for a Golden Globe) was great fun being bad in Gone Girl, but for this character to work, writer-director J Blakeson needed to make us root for her against our better judgment.

This time, Pike’s arch delivery and Marla’s devilish ingenuity aren’t enough. Blakeson stages the effective kidnapping of Jennifer so powerfully that I was never going to be on Marla’s side.

As the pitch-black comedy gave way to a tense game of cat and mouse, I found it impossible to care.