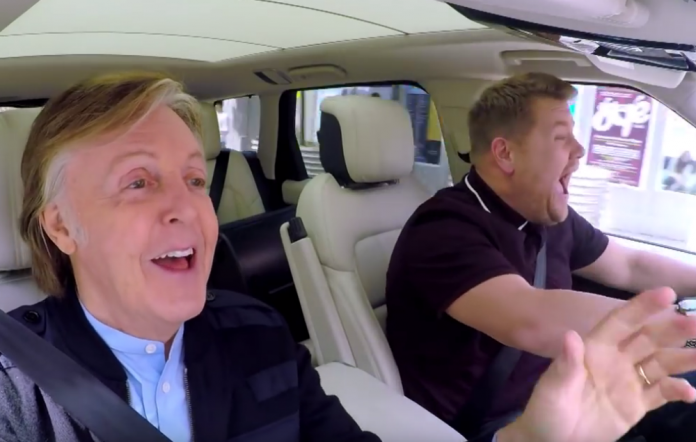 They filmed the segment in Liverpool

The first trailer has been released for Paul McCartney‘s Carpool Karaoke with James Corden.

The popular series has featured a wide range of artists including Christina Aguilera, Foo Fighters, Linkin Park and Pink.

But Corden has now secured his most prestigious guest so far, after the Beatles icon agreed to drive around the streets of Liverpool with him.

In the first trailer, Corden is seen ringing McCartney – and his request is filled with some vintage Beatles puns.

“Hey mate, I’m in Liverpool and I’m wondering if you can help. Yeah I need somebody, not just anybody”, Corden jokes.

The pair are then seen driving together, singing the Beatles hit ‘Drive My Car’.

The episode will also see the pair going on a Beatles tour in Liverpool. Tour guide Jackie Spencer told Variety: “We’d had a lovely morning. I had four people with me, from Washington State and California, and we were finishing the tour by the new statues.

“There was a couple of paparazzi around and we said to one of them, ‘Who’s the celebrity in town?’ We’d heard rumours but nobody would tell us. And then this guy said, ‘Well, I’ll tell you one of them: It’s James Corden. He’s with somebody else and they’re in that car over there.’

“And the next minute this black car pulls up and both Paul McCartney and James Corden get out of it!”

Spencer added that McCartney’s visit was a shock as she didn’t know he would be in Liverpool. “He just walked to us as we were taking the pictures. About 30-40 people were around, maybe. And he just stood and got pictures with everybody at the statue. He stood by himself,” she continued.

“He was being really nice to everybody. He was backing people in so they could get pictures with him. He and James Corden were taking selfies. And they just walked back, got in the car and disappeared off and went ’round Liverpool. It was fabulous.”

The Paul McCartney episode of Carpool Karaoke will air next week.