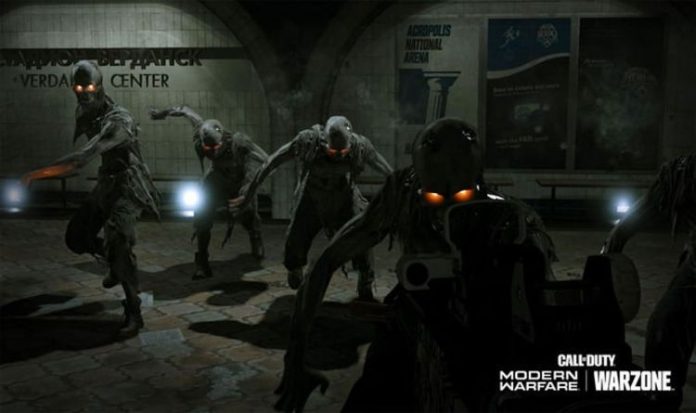 There’s been plenty of events in the past, but it looks like the Haunting of Verdansk in Modern Warfare, and Warzone could be one of the biggest yet.

Launching in Call of Duty on October 20, gamers on PS4, Xbox One and PC will get access to a number of different modes, and challenges.

What makes this a little different from past events is that the Haunting of Verdansk will spread across both Modern Warfare and Warzone.

In Warzone, gamers can expect a number of big Limited-Time modes (LTMs) to go live, including Zombie Royale and Warzone Night Mode.

Both of these have their own quirks and rules, which are explained at the bottom of this article. While these new modes go live in Warzone, gamers who just enjoy Modern Warfare can look forward to their own roster of LTMs.

And the good news is that we know exactly when everything will be going live across both games this week.

Activision has confirmed that the Call of Duty Haunting of Verdansk release date has been set for Tuesday, October 20, 2020.

This will happen across all platforms, including PS4, Xbox One and PC, with no mention of early access for any of them.

The Haunting of Verdansk release time has been reportedly set for around 6pm BST, or 10am PDT, if you live in the United States.

This is the usual launch schedule for Modern Warfare updates, but it will be worth keeping an eye out for any further news from Activision.

Available in select Warzone modes such a Trios, Verdansk is now open for nighttime infiltrations. Although the full moon’s glow prevents total darkness, operators might want to still pack some Thermal optics in their Loadout Drops to help spot enemies lurking about in low-light areas or use Cold-Blooded to counter these high-tech tools.

No matter the operation, visiting Verdansk at night will leave operators open to a few frights. Some say that a ventriloquist doll frequently appears on television sets tuned to defunct channels, and the poltergeist of a chainsaw-wielding killer can be seen and heard across the Krovnik Farmland. Others claim that the defunct tracks near the Train Station are still in use by a ghost train, a vessel filled with souls of those who lost their lives fighting in the Gulag.

Operators can fight against and alongside powerful zombified creatures as part of Zombie Royale, a limited-time mode where death is far from permanent.

Instead of being sent to the Gulag, dead Operators will come back to life as a zombie. Although zombies cannot use weapons, they have supernatural abilities: increased speed, improved jumps, deadlier melee attacks, and thermal vision.

Feeling Zombified? Time to fight your way back into the land of the living. When a player is killed, they drop a syringe that shows up on the map. Collect two of these Syringes as a Zombie, and you’ll parachute back in with your loadout on your Squad for a second chance! The last squad standing with a surviving Operator wins… even if the rest of the squad has turned undead.

Because this mode takes place at night, expect to find all the haunts that Verdansk has to offer under the bright moonlight, including those Trick or Treat Boxes that are fully loaded up with scares for the whole squad.

Squads must wrest control of a Juggernaut suit that spawns somewhere on the map and advance forward into a specific goal area. Be prepared for plenty of Minigun fire and consider powerful Killstreaks to take down an opposing Juggernaut, as well as the mad scramble whenever the suit is available for the taking. Also, the Juggernaut in this mode – and in all other modes during The Haunting of Verdansk – will come with a pumpkin head, which is surprisingly sturdy and durable despite it being a hollowed-out squash.

As the name suggests, leave all other weapons at home for this Team Deathmatch variant. Instead of custom load-outs, all operators will have a choice between five pre-built loadouts. Aim to have more kills than deaths, as the squad that hits the target score wins the match.