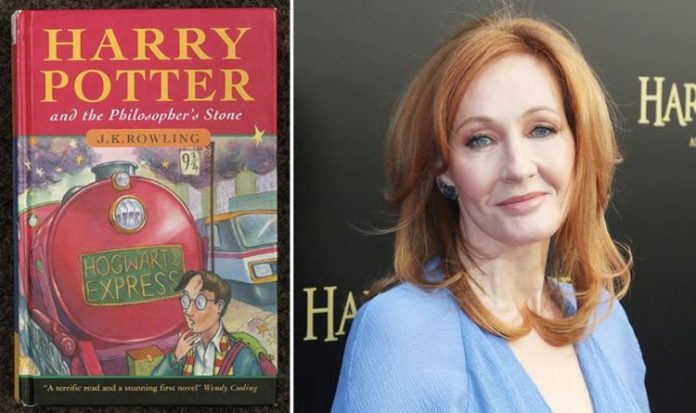 When JK Rowling first published Harry Potter and the Philosopher’s Stone in 1997 she was an impoverished single mother. Now almost 25 years later, the 55-year-old is the second-highest-paid author in the world with a fortune of around $700 million from her incredibly popular books and the subsequent merchandising and franchises. Given all this, it’s hardly surprising that a first edition of the first Harry Potter book is now set to auction at Hansons Auctioneers for around £30,000.

Only 500 copies of the incredibly rare first edition hardback of Harry Potter and the Philosopher’s Stone were published.

According to Edinburgh Live, it was a 68-year-old retired civil servant who was gifted the book back in 1997.

The owner had no idea how valuable the book would become and admits they’re lucky the novel is still in good condition as he almost dropped it in the bath when his kids were reading it.

He said: “The book was a present. As it turns out, it is the most valuable present we have ever been given.”

READ MORE: JK Rowling was told ‘You will NEVER make money out of Harry Potter’

The seller continued: “In 1997 we were living abroad on a Foreign Office posting.

“It wasn’t the other side of the world but, in a country with an esoteric language and not the strongest historical ties with the UK, opportunities for children to find English language books were few.

“So, when this book turned up from Yorkshire it was a rare thing – a novel – length children’s book with an intriguing storyline.”

He remembered how Harry Potter and the Philosopher’s Stone really drew them in, just as it did with millions of other people around the world.

The seller said: “It could have had a different kind of adventure, though, because our children like to read in the bath and when our son heard our copy was a first edition, he said he was glad he had never dropped it in the bathwater.

“They don’t get that habit from their dad I hasten to add.”

It turns out of the 500 Harry Potter and the Philosopher’s Stone first editions, 300 went to schools and libraries, while only 200 were sold in book shops.

Spencer added: “I’m honoured to be handling these, and I share the excitement of every vendor.

“I receive hundreds of emails and calls from hopeful owners of Harry Potters all over the world, so it’s a little tougher having to let most people down gently – but I check every enquiry, respond to every person, because it’s like panning for gold.

“When it was given as gift all those years ago no-one knew Harry Potter would turn into a worldwide phenomenon. The buyer unwittingly purchased a first edition, destined to be worth thousands of pounds decades later, as a gift. It’s lovely for the family.

“They had no idea their bookshelf contained something so special until recently.”