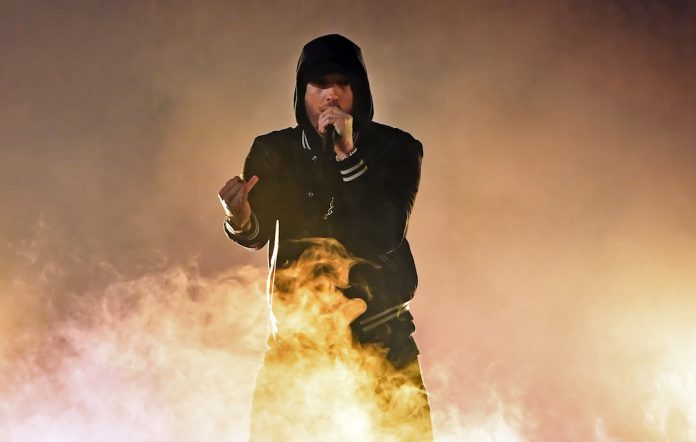 There’s a video on Twitter taken during Eminem‘s headline set at Bonnaroo (June 9) that starts off like any other festival phone footage. Fans with glitter on their faces dance and sing along, others film on their own phones. Then, a loud bang that sounds like a gunshot goes off and screams cut through the audio as the camera shakily drops and stops recording.

This is the most recent controversy Eminem has found himself embroiled in – the latest in a long line throughout his career. After his performance at the Tennessee festival, Twitter lit up with criticisms for deploying gunshot sound effects and festival-goers reported seeing people ducking for cover, believing the noises to be real. The rapper’s manager has since explained the sounds are not gunshots but a “pyrotechnic concussion, which creates a loud boom” and, this weekend, Marshall Mathers himself finally had his say on the matter.

Just before he was due onstage at Delaware’s Firefly Festival on Saturday night (June 16), a message from the star appeared on the big screens either side of the Main Stage. “If you are easily frightened by loud noises or offended by explicit lyrics then you shouldn’t be here,” it read. It was a characteristically stubborn note from an artist who has never shown much sensitivity, but it also missed the point.

Whether the noise in question is a gunshot sound effect or just a loud boom is irrelevant. It sounds realistically close enough to gunfire to cause panic and distress in a large crowd of people, and reacting in the way Eminem has shows no compassion or empathy for his fans. Some have argued that it’s been a feature of his shows for years, but you can counter that easily with recent history.

America is in a gun crisis. There have been 174 mass shootings in the US in 169 days this year, with 242 people killed and 631 wounded, according to this mass shooting tracker. Most of these incidents were not widely reported in mainstream media. The Parkland massacre in February may have reignited a nationwide debate about gun control and some states have responded by tightening gun laws, but the threat of gun violence in America is still very real. Children are put through active shooter drills at school. Adults do the same in their workplaces.

Then there are the events that unfolded at Las Vegas’ Route 91 Harvest Festival last October when 58 people were killed and more than 500 injured when a gunman opened fire on the crowd from the nearby Mandalay Bay hotel. US music fans may be getting on with their lives and still attending festivals, but if you think an attack like that isn’t lingering in the backs of people’s minds then you’re wrong. In the UK, the likelihood of being caught up in a shooting might be very low, but over here that scenario is alarmingly “normal”.

Eminem’s set might have used these “pyrotechnic concussions” for years, but that doesn’t excuse a lack of empathy and human compassion. Artistically, how will his set suffer if he takes them out? How much negative impact would that have on his performance? Likely not much, if any at all. But it would be a small compromise that would allow his fans to enjoy themselves and escape reality for 90 minutes without fear looming over them like you should be able to do at festivals. No one is asking Eminem to censor himself or suggesting this small gesture will end gun violence. All they are asking is for him to, for once, have a heart.