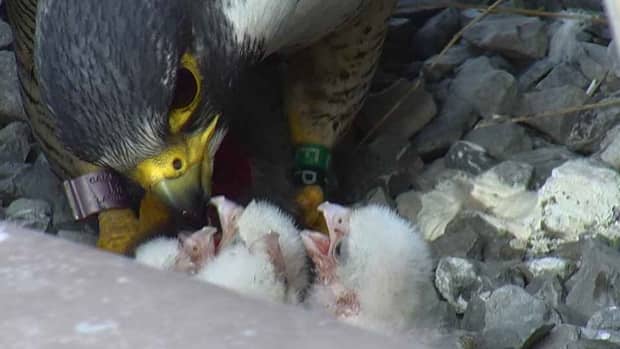 Bird-watchers in Hamilton say one of four baby peregrine falcons born at the city’s Sheraton hotel last month has died.

Falconwatch co-ordinator Chelsea Decoster says Gage was seen to fly to another ledge and then come down close to the street, where he was fatally struck by a car.

The three other male falcon chicks — named Ainslie, Lisgar and Lawrence after Hamilton’s parks — are said to be doing well.

It’s the 24th year the same nest site high on the side of the hotel is being used by a mating pair of peregrine falcons — a species that was once on the brink of extinction, but is now in recovery.

The city’s resident adult pair, Lily and Ossie, have been in Hamilton for three years now, with this marking their fourth nesting season. The Ministry of Natural Resources and Forestry, in partnership with the Hamilton Community Peregrine Project, puts identifying bands on the chicks so they can keep track of the growth and spread of the species.

That way they’ll know how many chicks live in each nest, where they end up, and if they survive. The birds are taken from the nest while the tests and banding happen, then returned.

Lily and Ossie didn’t hatch any chicks last year despite producing several eggs and produced just one in 2016.

The peregrine falcon is the fastest bird in the world, able to reach up to 386 kilometres per hour while diving. 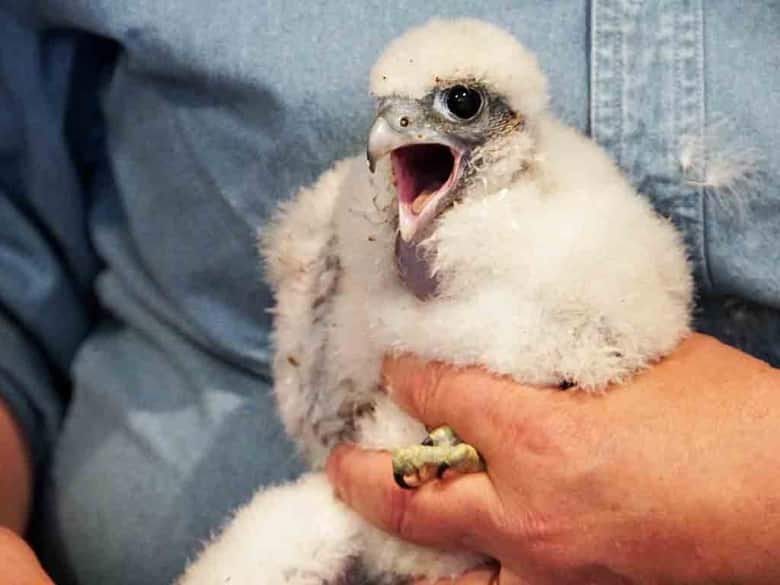 Four new peregrine falcon chicks were banded at the Sheraton Hotel in downtown Hamilton near the end of May. (Adam Carter/CBC)

The banding of three peregrine falcon chicks at the downtown Hamilton Sheraton hotel. 0:30