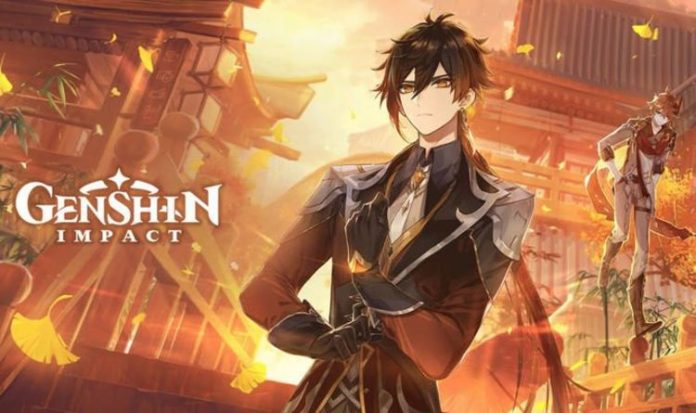 But looking at the release time for the launch version of Genshin Impact may give an idea of when update 1.1 will arrive.

The day one version of Genshin Impact arrived at 10am UTC+8, if that’s the same with update 1.1 then the patch will drop at 2am GMT on Wednesday November 11.

Ahead of the release of Genshin Impact update 1.1 miHoYo has released a teased trailer for the patch, which has been dubbed ‘A New Star Approaches’.

In the YouTube description for the trailer fans got a little bit more info on the inbound update. It said: “The seven victors of the Archon War once gathered to dine in Liyue. But godhood changed hands as two millennia went by, and five of those seven have now passed.

“Now, as the spirit of the sixth, Rex Lapis, returns to the heavens, an ancient god encroaches upon Liyue once more. A new star shall violate the divine sanctum, even as the city quails under the dark tides…”

This event will reward players with four star character Fischl. Here’s some more info on the event: “Peculiar meteorites are descending upon Teyvat, bringing a rare sleeping sickness with them.

While we know for certain that Genshin Impact 1.1 will bring with it four new characters, alleged leaks posted on Reddit appear to have revealed eight other heroes heading to Genshin Impact.

It’s unclear whether some of these could be surprise additions in Genshin Impact update 1.1, or whether they will arrive in the 1.2 patch in December or beyond.

Elsewhere, ahead of full patch notes being revealed miHoYo has announced one major new addition that will be coming with Genshin Impact 1.1

This is the new city reputation system which sees players able to increase a reputation rank by completing specific quests unlocked after talking to NPCs.

As a player’s reputation increases they will be able to unlock various rewards.

Going into more detail, miHoYo said: “As the new version update in November draws near, Travelers must certainly be growing curious as to what the new version may hold. So today, please allow me to introduce everyone to some of the new content you will see in this update — the City Reputation and Exploration Progress systems.

Here are some more details on the inbound reputation system…

1) Reach Adventure Rank 25 or above to unlock the City Reputation system.

2) Mondstadt Reputation: Complete the archon quest “The Outlander Who Caught the Wind” Prologue: Act I.

How to Increase Reputation

1. Region Quests: Complete various quests in Mondstadt and Liyue to increase your Reputation in each city.

2. World Exploration: Open chests, find Elemental Oculi, unlock Waypoints, and complete other exploration activities in the Liyue and Mondstadt regions to increase your Exploration Progress in each region.

3. Bounties: Hunt down and defeat the bounty targets to increase your Reputation in that city. The list of bounties will be refreshed every Monday. Each week you can complete up to 3 bounties in total across all cities.

4. Requests: Complete requests from the local residents to increase your Reputation in that city. The list of requests will be refreshed every Monday. Each week you can complete up to 3 requests in total across all cities.

As you increase your Reputation Level, you will unlock gadget blueprints, special city features, namecards, recipes, wind gliders, and other rewards.

And here are some details on other features heading to Genshin Impact in update 1.1…

Go to the Paimon Menu > Archive to view this feature.

At present, the Archive is divided into five categories: “Tutorials”, “Geography”, “Equipment”, “Materials”, and “Books”.

The Geography tab archives all unlocked Viewpoints in Mondstadt and Liyue.

Interact with the Viewpoints located in the areas marked as undiscovered to add them to the Geography Archive.

The Books Archive allows you to read all the books you have collected so far.

Additionally, some previously collected books will be removed from your Inventory and transferred to the Archive.

1) In the Character Archive, you can check when exactly each character joined your team. Select the “Details” button for more information on the Attributes, Constellations, and Profile of a selected character.