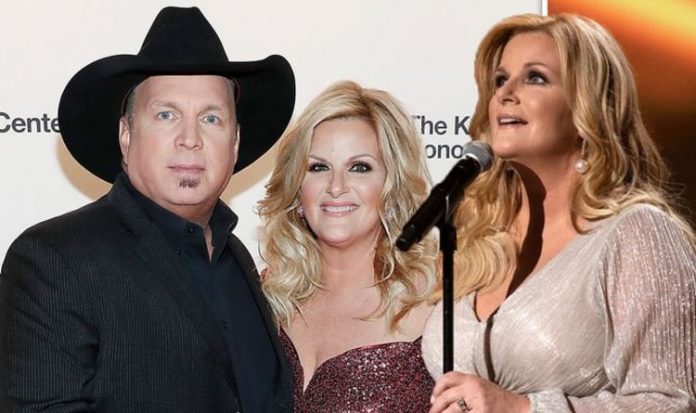 Garth Brooks may be a megastar of the country world, but his star wattage went up when he married Trisha Yearwood. Trisha is a singer in her own right, and Garth’s new music retirement ended when he began recording with his wife. Express.co.uk breaks down the story behind their love and how they came together.

She had gained an internship with record company MTM, who allowed her to make demos and be a backing vocalist for other singers.

One of the people she worked with was Garth, who was growing up in the country music scene at the time.

As Garth’s career progressed, he helped Trisha along the way, introducing her to executives who became interested in her voice and what she had to offer.

She signed with MCA Records and served as Garth’s opening act on his 1991 tour, with her debut single, She’s in Love with the Boy.

This song went to Number One on the Billboard country singles chart and was followed by her first album, named after herself.

She had other hit singles from this album, Like We Never Had a Broken Heart, The Woman Before Me and That’s What I Like About You, before she began working on her second album, which had a slightly different tone.

This album, Hearts in Armour, included many ballads speaking of heartbreak, which she felt in her own life having divorced her first husband, Chris Latham, in 1991.

With every album she released, her career showed growth and progression as her musical style altered, until 1997 she performed a version of LeAnn Rimes’ How Do I Live for the 1997 movie Con Air.

By 1999, Trisha had divorced her second husband, bass player Bobby Reynolds, which again informed some of her song choices around this time.

As her career continued to succeed, in 2007 she broke away from MCA, signing with Big Machine instead, and slowed her album production, working on other ventures like a cooking show, as well as joining Garth in Las Vegas for his residencies.

While she performed on occasion and made a Christmas album with her now-husband Garth, she made her big return to music in 2018 with a Frank Sinatra covers album, and went on her first solo tour in many years in 2019.

But how did she and Garth finally end up together after many years as friends?

According to Garth, even though he was married to someone else when they met, he says he knew he’d ‘met his wife’ when he first laid eyes on Trisha.

He told Ellen DeGeneres: “It’s strange because I felt that feeling like when you just meet your wife, but I’d been married for 13 months…

“You keep hacking [at marriage], you work and you work, and then comes that time where you’re looking at the rest of your life going, how do you want to live it?

“[Trisha] is somebody who I always enjoyed being around, and we had a lot more in common than I ever dreamed we did and we started seeing each other after the divorce, after we came off tour.”

Garth and his first wife split in 2001, at which point Trisha’s marriage to her second husband had also ended.

In private, the pair’s friendship slowly turned to romance. They were first seen holding hands in public in 2002, after which their relationship became clear to the world.

In 2005, Garth proposed on stage in California, in front of 7,000 people, much like Johnny Cash and June Carter.

Garth and Trisha married on December 10, 2005 at their home in Oklahoma, which involved Garth’s three children.

Speaking about how their relationship has worked over the years, Trisha told US Weekly in 2018: “We do date nights, but, honestly, we are apart maybe five days a year.

“We really have made a conscious effort since getting married to not be apart, so we’ve toured together.

“If I’m doing something, he’ll be with me, even if you don’t see him, he’ll be in the hotel or around.

“And we’re not always together, but we’ve been married before, and we decided we don’t want to be apart.

“So [we said] let’s make an effort to make sure that’s our priority and we’ve been able to do it.”