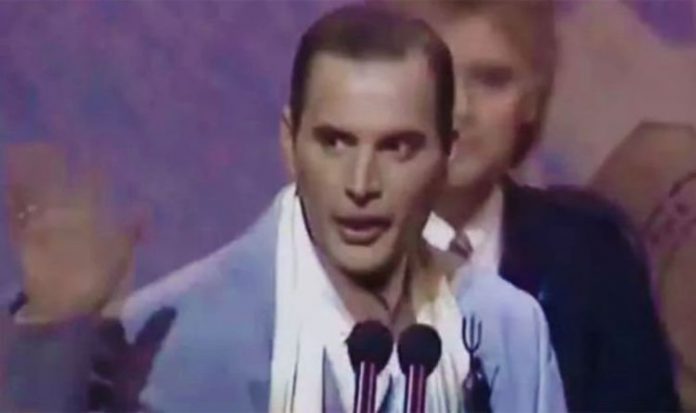 There had been rumours circulating that one of the biggest rock stars in the world was ill and possibly dying. But Freddie’s appearance on stage at the BRITS shocked viewers and seemed to confirm the worst. The Queen frontman looked dapper in his powder-blue suit with perfectly coiffed hair but he was undeniably gaunt and clearly a shadow of his usually extrovert and colourful self. The way he behaved and spoke (or didn’t speak) are even more heartbreaking to watch now, knowing that it was the beginning of the end.

Queen were recognised with The Outstanding Contribution to British Music Award at the 1990 Brit Awards, held at the Dominion Theatre in London, on February 18, 1990.

The chairman of the BPI Terry Ellis introduced them: “They are four men, all college graduates, who this year, celebrate 20 years working together… They’ve never really been fully recognised for the outstanding achievements of their impressive career. But tonight we’re going to put that to rights…”

A video montage showed clips of the band before focussing on each member individually, culminating with Freddie as fellow music legends paid their own tributes to him with great wit and warmth.

Phil Collins said: “Freddie is a one-off. You don’t get too many like him.”

Elton John joked: “If you ask Freddie how much a pint of milk is, forget it. He’d be able to tell you the price of nail lacquer.”

And then a clip was shown of Freddie himself saying, “ If I had to do it all again. Yes, why not? I’d do it slightly differently…”

At the end, when Paul McCartney says “King Mercury,” Freddie adds; “Long may she reign.”

May told the crowd; “On behalf of the group I’d like to say thank you very much to everyone in the industry — and, perhaps more importantly, outside the industry — who stuck behind us all these years, because in doing so you gave us a lot of freedom to pursue what we loosely call our art to any extent we felt like at the time and to go out on a lot of strange limbs which seemed very precarious at the time, but we didn’t quite fall off. And finally to get to the point where this happens to us, which is great.”

As the band walked off the stage, Freddie quietly stepped up to the microphone and said: “Thank you… goodnight.”

Except they take on another level of meaning when they become the last words he would say in public before his death on November 24, 1991.

They echo the iconic moment from the video for These Are The Days Of Our Lives where Freddie looks straight into the camera and says “I still love you.”