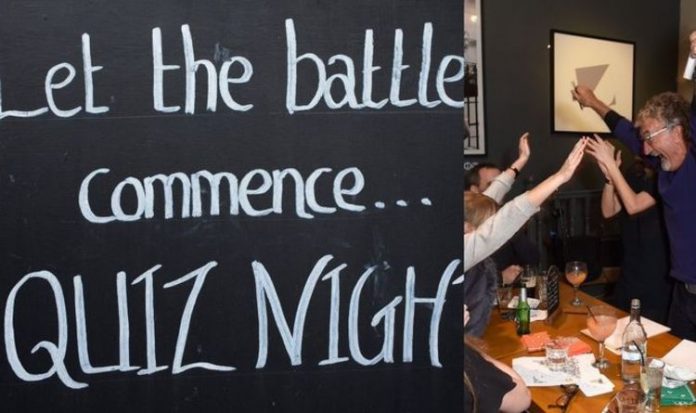 Everyone is becoming their own pub landlord and holding quizzes online, on Zoom or other video call apps. When the pressure is on for quizmasters to come up with new questions every week, it can be tough to think of good entertainment rounds. Here is our pick of some of the best topics and ways to construct your entertainment round.

It is really important when coming up with questions for a pub quiz to think of who your audience is.

No one enjoys a pub quiz where the questions feel like they are suited to people 50 years younger or older than them, so it is important to think about your crowd.

If most of your friends are in their 30s, entertainment questions based throughout the 1980s to present are best.

On the other hand, if your pub quizzers are in their 60s, it is better to think a little further back, more like the 1960s-1990s, and not necessarily to focus too much on present day movies or music.

However, if you are hosting your family on a pub quiz, there will be various ages represented, so in this case it is important to make sure there is a question for everyone.

In terms of topics, entertainment is far more than just films and music.

For those who are more interested in culture, theatre and art can also be represented in the questions, as well as musical genres which stretch further than just popular music, such as classical music and opera.

As well as that, topics like gaming and books are also ideal for the entertainment round, so long as there is not already a technology or literature round.

Here are our favourite music questions:

Q: Which country has won the most Eurovision Song Contests?

Q: Who wrote the Wedding March?

Q: Who was the first Beatle to have a solo Number One single?

Here are our favourite theatre questions:

Q: What is the longest-running musical on Broadway?

A: The Phantom of the Opera

Q: On what Shakespeare play is West Side Story based?

A: Romeo and Juliet

Q: Which on of these stars is NOT an EGOT? (EGOT is someone who has won an Emmy, Grammy, Oscar and Tony Award.)

A: Liza Minnelli (she has not won a Grammy)

Here are our favourite movie questions:

Q: Name all the official James Bond actors (a point for each, bonus points for any unofficial actors)

Q: Which is the best-selling movie soundtrack in the UK?

A: The Sound of Music

Q: Who directed Parasite – the first foreign-language film to win the Academy Award for Best Picture?

Q: ‘Frankly my dear, I don’t give a damn’ is an iconic line from which classic film?

A: Gone with the Wind

Q: Which film is rated the best film of all time by IMDB?

A: The Shawshank Redemption

Q: What is the name of the movie starring Natalie Portman in her first film role? (Bonus question: What year was it released?)

Q: Name one of the three movies to have won all the top five categories at the Oscars in the same year (those being Best Picture, Best Director, Best Actor, Best Actress, Best Screenplay)

A: It Happened One Night, One Flew Over the Cuckoo’s Nest or Silence of the Lambs