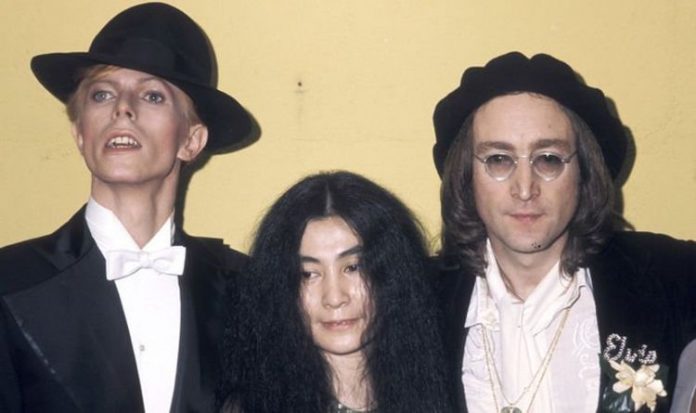 Bowie gave the speech at the Berklee College of Music commencement ceremony in 1999. You can watch his fantastic and entertaining comments about Lennon and more in full below. Disappointingly, the rather stuffy folk on the stage behind him seem considerably less amused that the main crowd. The rest of us can thoroughly enjoy one music legend paying tribute to another and also painting a wonderful picture of the former Beatles star’s wicked sense of humour – complete with a fake Liverpudlian accent.

Bowie does not hold back with his praise, saying: “It’s impossible for me to talk about popular music without mentioning probably my greatest mentor, John Lennon.

“I guess he defined for me, at any rate, how one could twist and turn the fabric of pop and imbue it with elements from other artforms, often producing something extremely beautiful, very powerful and imbued with strangeness.”

It doesn’t take long, though, for Bowie to talk fondly and hilariously, about Lennon’s famously dry humour.

Bowie said: “The seductive thing about John was his sense of humor. Surrealistically enough, we were first introduced in about 1974 by Elizabeth Taylor…

“So John was sort of (puts on a Liverpool accent) ‘Oh, here comes another new one.’ And I was sort of (thinking to myself), ‘It’s John Lennon! I don’t know what to say. Don’t mention the Beatles, you’ll look really stupid.’

And he said, ‘Hello, Dave.’ And I said, I’ve got everything you’ve made—except the Beatles.'”

A lifelong friendship was born even if Lennon poked fun at Glam Rock, which Bowie had spearheaded during his Ziggy Stardust era.

Bowie said: “He once famously described glam rock as just rock and roll with lipstick on. He was wrong of course, but it was very funny.”

The funniest anecdote, however, describes Lennon’s truck to avoid fans and how he turned it back on Bowie himself.

Bowie added: “Towards the end of the 70s, a group of us went off to Hong Kong on a holiday… And during one of our expeditions on the back streets a kid comes running up to him and says, ‘Are you John Lennon?'”

Bowie continued: “And he said, ‘No but I wish I had his money. Which I promptly stole for myself…

“It’s brilliant. It was such a wonderful thing to say. The kid said, ‘Oh, sorry. Of course you aren’t,’ and ran off. I thought, ‘This is the most effective device I’ve heard.’

I was back in New York a couple of months later in Soho, downtown, and a voice pipes up in my ear, ‘Are you David Bowie?’  And I said, ‘No, but I wish I had his money.’

“(Bowie puts on a Liverpool accent) ‘You lying bast**d. You wish you had my money.'” It was John Lennon.”