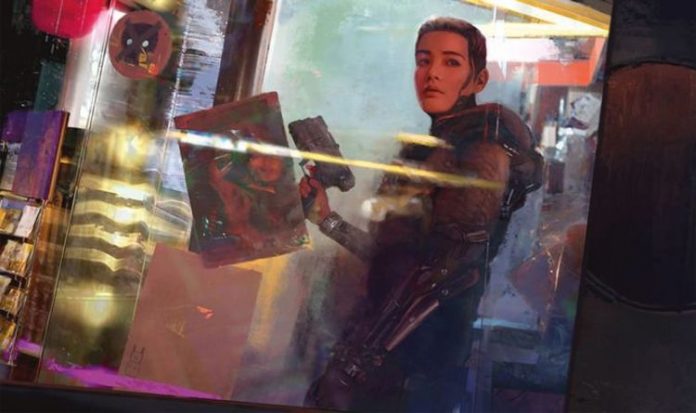 The Cyberpunk genre has exploded in the past five years. With the upcoming arrival of Cyberpunk 2077, and the release of hit films such as Blade Runner 2049 and Alita: Battle Angle, the style, aesthetic, and clout has become more mainstream. R. Talsorian Games were well ahead of the curve, as their critically acclaimed cult roleplaying game Cyberpunk 2020 has been thrilling households since 1990. Although the game has captivated audiences for three decades, it didn’t come without its complexities. As new players have bounced from more mainstream tabletop roleplaying games (TTRPGS) such as Dungeons & Dragons to Cyberpunk 2020, they have wrestled with a few rules which were perhaps too harsh for players, and others which challenged Referees (game masters). Some of these rules were rectified and altered drastically in 2005’s Cyberpunk 3.0 – but this version of the game has since been retconned, keeping Cyberpunk 2020 as the main game of the franchise.

This week Cyberpunk RED will be released by R. Talsorian Games, the true follow-up to Cyberpunk 2020.

The new core ruleset looks to revitalise and revolutionise not only the rules of the cult hit RPG, but also expand the world in which players inhabit in an unprecedented way.

What’s more, Cyberpunk RED takes place in 2045, and acts as a lead-up to the events of CD Projekt Red’s upcoming video game Cyberpunk 2077.

First and foremost, it is important to note just how much has changed in the tangible world of Night City.

After Johnny Silverhand’s battle against Arasaka a nuclear weapon was set off in the centre of the city, obliterating a large chunk of what players will have known as Cyberpunk’s main hub.

This, in turn, eradicated the NET as players know it, and indeed cut off a lot of communications between Night City and the rest of the world.

The city was also emblazoned with a blood-red nuclear haze – the RED in Cyberpunk RED.

While these are the main takeaways from the bomb going off, the political and socioeconomic fallout of the event is detailed in great depth in rulebook.

Most notably, however, is how this fallout changes the world in which players inhabit.

Cyberpunk RED retains its far-flung, bombastic future where cybernetic limbs are common, and gangs rule the streets – but the world-changing event has altered almost everything players might remember from Cyberpunk 2020.

A distinct feeling of poverty now runs through the streets of Night City, and a player might struggle to get their hands on a new weapon, or Agent (a sentient cell phone/PDA in your pocket), or some clean vegetables.

This, really, is a fantastic starting point for players, as they are forced to build their characters from the ground up, with a massive focus on creating what their identity is, and what they want to achieve in the forthcoming game.

The original line-up of Cyberpunk 2020’s Roles (classes) is still present – however Cops have now changed to Lawmen.

The Roles function, fundamentally, the same as they did in Cyberpunk 2020. Each one has a massive pool of abilities they can put skill point in to, with a special Role Ability which differentiates them from one another.

The Role Abilities listed in the book are detailed, and well thought out, but some stand out more than others.

While Medias can create rumours and news to change the landscape of the game, Lawmen can call for backup from their local police force.

The biggest difference about these special abilities is that they can now be upgraded, creating opportunities in which an Exec can call forth a team of underlings to fight their battles for them, while relaxing in their skyline penthouse.

Creating characters does look a little daunting at first, but newcomers to the TTRPG genre are well looked after in Cyberpunk RED. A new system allows players to choose from one of three “packages” to create their character as fast and as easy as possible.

The Streetrat package essentially gives players a group of stats, and enough information for them to start playing right away. The Edgerunner package gives a little more flexibility, allowing players to choose from a small pool of skills to specialise into. The Complete Package is the classic Cyberpunk experience – giving players no restrictions in how they want to play.

Despite these options being a great idea, it could arguably create a divide between player bases if half the table were to use pre-generated characters, and the other half used completely customised heroes – but that really comes down a table-by-table basis.

For me, the most exciting piece of every Cyberpunk game is the cyberware.

There are pages and pages of cyberware enhancements included in the Cyberpunk RED ruleset, allowing each player to customise their character with barbaric and intriguing robotic enhancements – but this time around the Humanity Loss seems greater, meaning players may not be able to walk around in a fully-decked-out character from the beginning of the game.

Thankfully, vital character progression is easier than ever. Improvement Points are back, and are awarded to players at the Referees’ discretion, allowing them to fine-tune their skills once playing has begun.

These improvement thresholds are far steeper, however, meaning the players may be upgrading less, and staving off death a lot more.

On the topic of death, the health system has been completely overhauled.

One of Cyberpunk 2020’s more confusing aspects was the Wound system, which essentially acted as a tally chart for each character’s limb.

Cyberpunk RED has now implemented a hit point system – in line with other modern TTRPGs – and removed the limb system.

While aimed shots are still present (allowing players to pick off the head, limbs, or weapon of an enemy) the hit points keep things simple, and better quantify whether a player is wounded, critically wounded, or straight up flatlined.

Players won’t only be hurt in firefights, however, they can also experience damage through Netrunning.

Anecdotally, most game tables shelved Netrunning in Cyberpunk 2020, as it was too complex to run, and entirely separate from the rest of the game field.

Now, Netrunning has been overhauled entirely, utilising a new Virtuality system – essentially, an advanced version of augmented reality – forcing Netrunners to be involved in the firefights whilst battling off virtual firewall programs named Black Ice.

The new method of diving into the Net is intriguing, fun, and exciting – however it does feel a little restrictive at first. Local networks can only be used, meaning jumping into the vast, endless internet in the style of William Gibson’s legendary novels is no longer an option – unless a Referee opens that option up to players.

Instead, the local network defined in the new ruleset details Netrunners diving through files and removing Black Ice to gain information and advantages.

Netrunning feels a little bit like a side activity now, which is good in terms of player-party synergy, but can be somewhat underwhelming when “hacking” is such a vital part of Cyberpunk.

Although some pieces of the new game may seem a little confusing at first, there are dozens and dozens of pages explaining the lore behind the new Cyberpunk RED world.

Mike Pondsmith and co have done an exceptional job at teasing out exactly why players might want to explore the deeper, more unrefined edges of Night City.

By rewriting the legendary Never Fade Away story, and expanding on the defined lore of Night City, fans of the franchise are simply going to love this epic continuation of the lore.

Cyberpunk RED brings the systems and styles created in Cyberpunk 2020 into the 21st century. A lot of what players know and love is present, but an enormous amount of changes almost leave this game unrecognisable to its predecessor – for the better. Almost all of the incredible pieces of the Cyberpunk puzzle have been meticulously improved for a more fluid, modern, and exciting tabletop roleplaying game. Netrunning has been given quite a bit of attention, with an entirely new subsystem behind it – and it is easily one of the most attractive parts of the game. Despite this, there are some downfalls to it, as the new look into the Net has been constricted drastically, in order to create a more creative sense of player synergy. The incredible amount of cyberware and weaponry might make up for this, though, as the levels of customisation in each of the 10 class roles are almost endless. Tabletop RPG fans are going to adore this new inclusion to the genre, and will almost definitely leave Cyberpunk 2020 at the wayside after RED makes it mark on the industry.