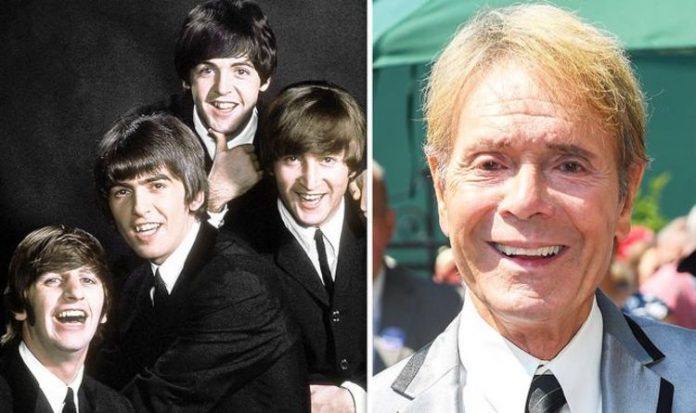 The Summer Holiday singer, born Harry Rodger Webb, is one of the most successful musicians in history after selling more than 250 million records worldwide. He rose to fame with The Shadows – formerly known as The Drifters – in the late Fifties and when The Beatles emerged he was considered a rival. Sir Cliff, 80, reflected on the battle between the bands as they tried to carve space for themselves in the UK charts.

Sir Cliff admitted that when he first heard the Fab Four he wasn’t impressed.

He said: “I didn’t think The Beatles were anything special at first.”

The singer listened to them “covering some old track” and remarked that they “hadn’t sounded very good at all”.

This was before The Beatles travelled to Hamburg, Germany, in 1960, and when they returned “they blew everybody away”.

Despite this, Sir Cliff claimed he had been “a bit of an unofficial PR man” for the band.

Cliff Richard had a number of hit with The Shadows when The Beatles emerged in the Sixties (Image: GETTY)

While he was on tour in South Africa, he asked DJs to play The Beatles 1963 hit Love Me Do.

Sir Cliff listed the track as his “favourite record by another artist” and often expressed sorrow that he didn’t record it.

He told one radio station: “I wish The Shadows and I had this song because it’s great!”

In his 2020 autobiography, Cliff Richard: The Dreamer, the star admitted that he often made “a little joke about the brand-new hopefuls”.

He recalled being quizzed about The Beatles by one presenter, who said: “Do you think they will be huge?”

JUST IN: Cliff Richard’s heartbreak over album ‘they will never let me do’

The Beatles first number one in the UK charts was Please Please Me in 1963 (Image: GETTY)

Sir Cliff replied: “I shouldn’t think so… their name just sounds like something that you tread on!”

He reflected that it “was not my finest prediction” because “something big” happened to The Beatles while they were in Hamburg.

Sir Cliff recalled that his then-rival Sir Paul McCartney claimed “the main reason” The Beatles went to Germany was because of him.

According to the Star, Sir Paul said: “Cliff and The Shadows had got everything sewn up in Britain.”

Sir Cliff was taken aback by the comment and shocked that he had such a big impact on the band’s career.

Cliff Richard was regularly mobbed by fans but was jealous that he never broke the US (Image: GETTY)

He wrote: “I knew we were doing well, but I didn’t know we were forcing our competition to emigrate!

“Well, for whatever reason, it worked for them.

“When they came back from Hamburg, they were tremendous.”

Sir Cliff claimed that in his “idle moments he occasionally wondered” what would have happened if it was “the other way round”.

He wrote: “[What if] The Shadows and I had gone to Germany, rather than The Beatles? Well, it’s all speculation.”

Cliff Richard and Paul McCartney divulged the clashes they had over recording at Abbey Studios (Image: GETTY)

While Sir Cliff and the band appeared to become friendly during their years in the spotlight. they clashed a few times.

Both artists were signed to Apple Records and would argue over recording slots at EMI’s Abbey Road Studios, in London.

Sir Cliff commented that The Beatles “owned” the iconic recording studio due to their success there – but he and The Shadows “owned it first”.

He recalled meeting Sir Paul at the Abbey Road and being told that “every time The Beatles called” Sir Cliff was mysteriously “in Studio 2” – meaning they couldn’t record.

In a 2019 Sunday Post article, Sir Cliff countered: “I said to him, ‘Every time we called, YOU were in the studio!’

“There was this funny little fight going on and in the end we made our records quite happily – but not at the same time!”

Sir Cliff made history last November after the release of his 45th studio album – Music… The Air That I Breathe.

He became the first British musician to have top five albums in the UK charts across eight consecutive decades.

Sir Cliff was also due to go on tour to mark another milestone that year – his 80th birthday.

However, due to the coronavirus pandemic the dates had to be postponed.

The Beatles broke the US after an appearance on a US talk show (Image: GETTY)

In his book, Sir Cliff also said that his 2021 topless calendar was the last time he would pose without a shirt.

He explained: “I suspect it’s time to gracefully exit the Chippendales market.”

Sir Cliff noted that former BBC DJ Chris Evans was so shocked by the singer’s physique that he didn’t believe it was him.

He recalled the radio star stating that it “couldn’t be my body” and quipped that he “must have superimposed my head onto somebody else”.

Sir Cliff continued: “That made me laugh.”

Sir Cliff’s new autobiography Cliff Richard: The Dreamer was published by Ebury Press in October 2020. It is available here.