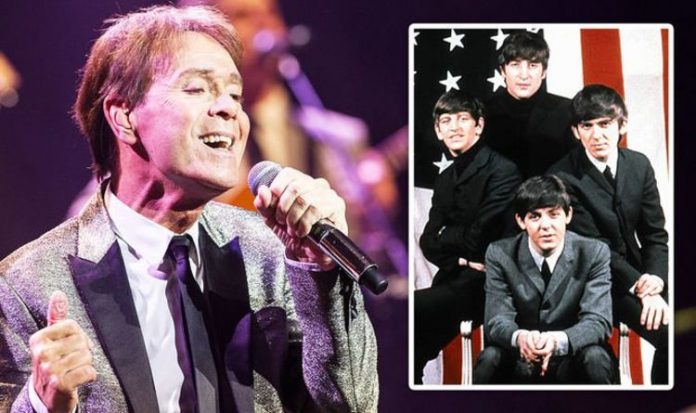 The 80-year-old’s feud with the Fab Four has been well-documented over the years. Sir Cliff didn’t rate his future “arch-rivals” after first hearing “some old cover” they performed but several years later U-turned on his damning verdict. In one account, Sir Cliff explained the part he played in The Beatles’ first number one hit.

Prior to Beatlemania and their undeniable success across the pond, Sir Cliff admitted that he didn’t have much hope for the Liverpool band.

When asked whether he thought that would “be huge”, he replied: “Their name just sounds like something you tread on!”

Despite his cutting remark, Sir Cliff encouraged DJs to play their songs when asked about his favourite UK artist.

However, when The Beatles “broke America” after their 1964 appearance on The Ed Sullivan Show, Sir Cliff was furious.

He admitted to being “jealous” of their success and was upset that he had never experienced that same reception across the pond.

Cliff Richard revealed the part he played in The Beatles first number one hit From Me To You (Image: GETTY)

Cliff Richard was jealous of The Beatles for many years because of their success in the US (Image: GETTY)

In one rant, Sir Cliff fumed: “It’s ridiculous! Has everyone forgotten me? What’s going on?”

While Sir Cliff and The Beatles were musical rivals, for many years the emerging band admired the Summer Holiday singer’s work.

John Lennon famously said there was “nothing worth listening to in British music” before Sir Cliff and The Shadows.

Sir Paul McCartney also revealed that The Beatles travelled in Hamburg, Germany, in the early Sixties, because Sir Cliff had “everything sewn up in Britain”.

Sir Cliff was flattered by their praise and quipped: “I knew we were doing well, but I didn’t know we were forcing our competition to emigrate!”

John Lennon asked Cliff Richard to delay releasing a song to ‘give The Beatles a chance’ (Image: GETTY)

The singer first met The Beatles in 1963 at the house party of his then-bandmate Bruce Welch.

There he claimed Lennon jokingly asked him to delay the release of his next single to “give us a chance”.

During that meeting, Sir Cliff recalled The Beatles debuting their first number one hit before it was released.

The track, From Me To You, topped the UK charts in 1963 and sold more than one million copies a year after it was released.

It was followed by 16 other UK number ones and led The Beatles to become the best-selling musicians in UK Singles Chart history.

Cliff Richard performed with The Shadows when he first met The Beatles in 1963 (Image: GETTY)

Below them in the report, which was published in 2012, was Elvis Presley and then Sir Cliff Richard, who had sold more than 21.5 million singles.

On the fateful night that The Beatles played From Me To You to Sir Cliff, he claimed they were very dismissive of the track.

In his 2020 autobiography, Cliff Richard: The Dreamer, he suggested that they could have abandoned the song had it not been for him.

He recalled The Beatles making an appearance at a party he attended after they performed at The Lewisham Odeon.

Sir Cliff said the band were “friendly and smart” and “chatted away like mad” during their first meeting.

After Lennon hinted that they had a follow-up song to Please Please Me, the singer probed further.

Cliff Richard was adored by thousands of fans but always regretted never being a hit in the US (Image: GETTY)

Sir Cliff asked: “Oh, what’s that going to be?”

Lennon replied: “We don’t know yet but we’ve got one song we quite like.”

Moments later, they were handed a guitar and asked to play it.

Sir Cliff recalled: “The Beatles glanced at each other and shrugged.

“Then John took the guitar, started strumming and he, Paul and George began singing in perfect harmony.”

As the band sang the first line – “If there’s anything that you want…” – Sir Cliff was amazed.

He recalled: “Wow! The first few bars of From Me To You blew my head off! What a song!

“But The Beatles seemed totally blase about it.”

Sir Cliff remembered Lennon telling him: “We’re not quite sure about it.”

The singer replied: “Are you kidding me? That’s fantastic! That’s your first number one right there!”

Cliff Richard is one of the UK’s most successful singers and had number ones across eight decades (Image: GETTY)

Sir Cliff added: “And I was absolutely right.”

For many, From Me To You was The Beatles’ first number one after it topped the chart in the UK.

While Please Please Me reached number one in “almost every chart” it never topped the Record Retailer’s chart, which later became the UK Singles Chart.

Please Please Me reached number two in that listing, which was considered to be the most authoritative of its time.

Cliff Richard: The Dreamer was published by Ebury Press in October and is available here.