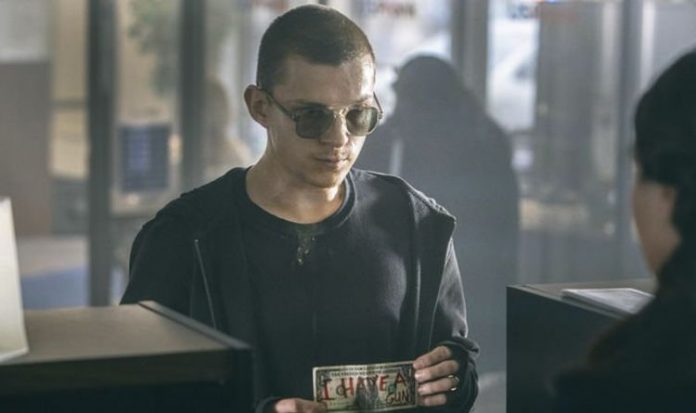 Author Nico Walker released the semi-autobiographical novel Cherry from inside prison in 2018. His debut novel told of how a veteran suffered from post-traumatic stress disorder (PTSD) after fighting in the Iraq war in 2005. After discovering heroin, the novel’s character started robbing banks to pay for his habit. Spider-Man actor Holland takes on this nuanced role, which spans more than six years and multiple gripping chapters.

Holland plays an unnamed man who falls in love, goes to college and ends up signing up to join the US Army.

The character himself is brash, drastic and sometimes frustrating – as a teenager should be – but it doesn’t make for great viewing at first.

While the hero of the story is shown to be poetic and reserved in nature, it feels as if his persona changes long before he arrives in Iraq.

Despite this, the second chapter of the film, Basic, is by far the best portion of the movie.

Holland brings a unique physicality to the role while expertly fighting through his emotions.

After running a mile to save a fallen friend, the young Marvel star still had enough acting prowess to deliver some of the most touching scenes in any film from this year yet.

Holland lost more than 25lbs to reach into the follow-up chapter of the movie – Dope Life.

After turning to drugs to deal with the trauma he had witnessed first hand, the protagonist falls into a vicious cycle of robbing banks to buy daily doses of heroin.

Holland brings some delicate comedy in these scenes which show the bumbling 24-year-old struggling to carry out efficient robberies.

What viewers get in those moments is akin to an elongated montage that doesn’t do well in portraying just how broken the protagonist is through his time in the army.

The Russo brothers bring it back, however, when he starts spending more time with his wife, Emily (Ciara Bravo).

Emily is pushed to the side in much of the first half of Cherry. She is more of a goal or reward for Holland’s character for coming back from war.

But when Bravo begins truly acting in her most vital scenes she outdoes Holland and everyone around her. Bravo is absolutely one to watch.

The Russos can also not be faulted for how they shot the movie.

Cherry is gorgeous, even in its most bleak scenarios.

From bombs being rained on Holland in Iraq to his decrepit drug den, the movie gives a terrifying yet memorable glimpse at the decaying beauty of the protagonist’s life.

Cherry is a superbly shot film with a collection of wonderful actors taking on a hard-hitting story – but it isn’t perfect. The subject matter is tough to watch and is handled very well, but the middle portion of the movie – arguably its most important moments – are not given enough time to shine. Holland gives one of his best performances yet, but without him and Bravo, the film might have been half as impactful.