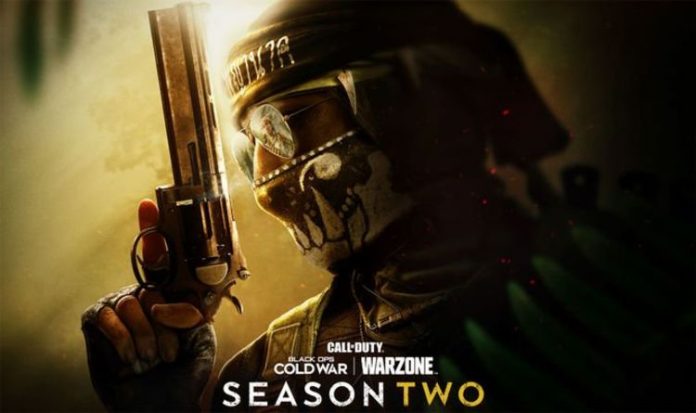 This Zombies-style experience is set on a huge map and sees players facing off with surviving against hordes of enemies as they complete experiments while using vehicles and other devices.

Elsewhere Call of Duty Cold War season 2 will bring with it a brand new Battle Pass with 100 tiers.

And the season 2 patch has also changed the Verdansk map in Warzone, with a new Shipwreck POI added.

Speaking about the release of the new Black Ops Cold War update, Raven Software on Twitter said: “Season Two is now live in both #BlackOpsColdWar and #Warzone!

And if you’re interested, you can find full patch notes on the latest Call of Duty update – which were revealed in a post online – below…

Loot that spawns across Verdansk has been updated… and now includes two brand new weapons: the FARA 83 Assault Rifle and the LC10 SMG

Warzone Intel Missions have been removed

Call of Duty season 2 events have been revealed as part of the latest patch notes (Image: ACTIVISION)

Celebrate the launch of Season Two with free access to a brand-new Zombies experience known as Outbreak, action-packed Multiplayer maps (including the new map Apocalypse), and more in Black Ops Cold War from February 25 to March 4. Onslaught is also available to PlayStation owners during this access period as well.

Need an introduction to Outbreak in Black Ops Cold War Zombies so you can claim all the items from this Challenge Event? Check out the following blogs:

Starting on Feb 26, all players get Double XP and Double Weapon XP all weekend long in Black Ops Cold War and Warzone to celebrate the kickoff of Season Two! Gain twice as much progress toward your next Prestige and max out those weapons through 10AM PT Mar 1. PlayStation players also get an extra 24 hours of 2XP and 2WXP starting Feb 25.

Up to 99 players will drop onto Rebirth Island for an incredibly frenetic fight for supremacy, as they look to eliminate every last member of enemy squads to prevent them from getting a second, third, or even forth chance at revenge. Just like Resurgence, squad members can spawn back in if their Rebirth Countdown hits zero and at least one of their allies is still alive, and specific Caches around the map will refresh their items frequently to ensure there is no shortage of firepower around the island.

In this mode, a portable radio crackles into life, coming online somewhere in Verdansk. The Operator who secures this radio and holds onto it for a sufficient period of time automatically wins the game for their squad. To ensure their exfil isn’t by the book, anyone holding the radio is marked on the Tac Map as if they were under a Most Wanted Contract (High Value Target) with all Operators also receiving intel on how much longer the current radio holder has until they win. Other than this new win condition, the same Battle Royale rules apply. Expect a circle collapse and a winner to be determined by last squad standing, should nobody receive an early exfil with the radio.

A Call of Duty 2XP Weekend is just around the corner (Image: ACTIVISION)

100 Tiers including two Weapons, a new Operator, and the first Reactive Weapon Blueprint

And a lot more!

The doomed cargo tanker known as the Vodianoy has run aground in the low estuary of swamp ground less than a klick west of the Zordaya Prison Complex.

Jarvdinsk Spomenik above the Arklov Peak Military Base

Due to the contamination, security protocol mandates a complete shut down of the following locations:

Call of Duty Shipwreck Warzone POI has been added with the new season 2 update (Image: ACTIVISION)

The Reactive property lets Operators display their skill in real-time by evolving their weapon’s appearance with kills during a match.

For example, the “Vulture Exo” pulsates a green energy across the skeleton of a bird that wraps around the entire weapon. As an Operator earns kills, this energy shifts from blue to orange and eventually red, signifying how much of a hot hand they have in the match.

The following attachments have also had their functionality adjusted:

Players should no longer spawn outside of the Gulag combat area

Fixed an issue with War Tracks not playing correctly

The Season Two download is going to be large. In order to reduce the overall disk space that MW and WZ take up, you can uninstall the content packs for modes that you’re not playing if you want to free up space. You can learn how to do so here.