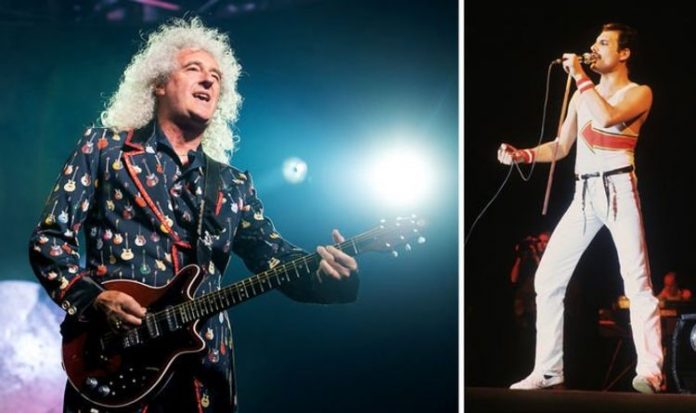 Brian May has continued to entertain fans through his Instagram account during the pandemic. And in one his latest videos, the 73-year-old shared a fascinating piece of Freddie Mercury and Queen music history. May was seen strumming his and Kerry Ellis’ new festive song One Beautiful Christmas Day on an acoustic guitar, but it’s not just any musical instrument.

May wrote: “By the way, this is my favourite Hummingbird acoustic – bought in Japan around 1975 – which I’ve used on every tour with Ms. Ellis.

“And going further back – it’s one you hear at the end of The Prophet’s Song on the QUEEN A Night at the Opera’ album.

“Leading into Love of my Life. And Dreamers Ball too, I seem to remember …. Bri.”

The Prophet’s Song, written by May, is track 8 on Queen’s 1975 album A Night at the Opera.

While Love Of My Life does indeed follow straight afterwards, a ballad written by Freddie Mercury.

And Dreamer’s Ball is May’s Elvis Presley tribute from a year after The King’s death which features on Queen’s 1978 album Jazz.

Back in October, Brian May told Express.co.uk that he feels closest to the late Freddie Mercury when performing Love Of My Life.

The 73-year-old still performs the track with an acoustic guitar (perhaps his Hummingbird?) during Queen and Adam Lambert tours.

May said: “I’m sitting there on a stool and in the old days it would have been Freddie right beside me, while I play acoustics.”

During the concert performance, which is included in the new Queen and Adam Lambert live album, a virtual Freddie appears on a screen behind Brian to sing the last verse.

He added: “It’s just a beautiful moment, I love it so much. By that time the audience have lit up all their phones and we have a moment.

“The crowning glory is Freddie coming on and tying the whole thing up with a great sense of humour as he always did have, which I think is the icing on the cake. And then he’s gone and that’s it.”

Queen and Adam Lambert are set to perform their postponed tour dates in the UK and Europe next year.

And while its unclear if those concerts will have to move again, May has taken matters into his own hands.

The Queen guitarist and Doctor of Physics is now on a mission to save Rock and Roll by designing a special airflow system for our pandemic world.

May shared some test footage and photos from Hammersmith as he and his team set about trying to make concert venues as safe as possible.